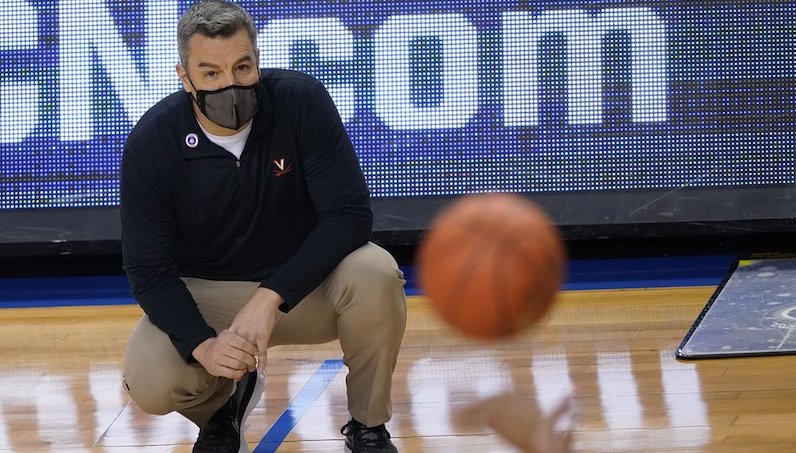 Virginia head coach Tony Bennett watches play during the first half of an NCAA college basketball game against Syracuse in the quarterfinal round of the Atlantic Coast Conference tournament in Greensboro, N.C., Thursday, March 11, 2021. (AP Photo/Gerry Broome)

Despite a shocking, whiplash exit from the 2021 ACC Tournament, Virginia basketball remains poised to participate in the NCAA Tournament.

According to a tweet from college basketball insider Jon Rothstein, the NCAA Tournament Selection Committee put together a mock bracket on Friday; the committee included both Virginia and Kansas, which left the Big 12 Tournament after a positive COVID-19 test result, too.

Source: The NCAA Tournament Selection Committee went through the bracket today and included both Kansas and Virginia without hesitation. Plans are moving forward for both to be playing next week.

The NCAA requires seven straight negatives from all members of a team’s travel party to play in the NCAA Tournament. Of course, the 2021 NCAA Tournament gets going in full force next Friday, March 19.

As Matt Norlander from CBS Sports noted earlier, the positive COVID-19 test result came from one of the eight Virginia players that participated in the win over Syracuse. Fortunately, every Syracuse player tested negative following the game.

At 18-6 (13-4 ACC), Virginia won the ACC regular season title; the Cavaliers currently rank 13th in the NET, the ACC’s top team in that metric.