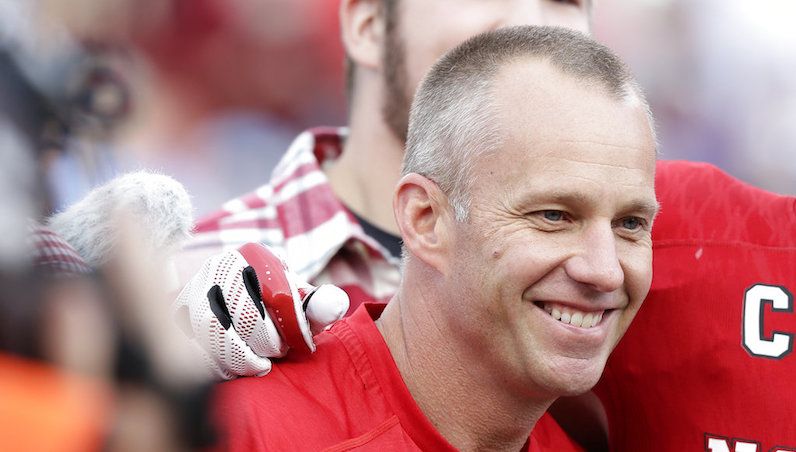 Over at USA TODAY Sports, columnist Dan Wolken filed a story this afternoon on NC State and its football coach, Dave Doeren. According to Wolken, Doeren and Debbie Yow, the school’s athletic director, are in a “contentious” standoff over contract negotiations.

Back in October, it was Wolken that reported Doeren and Yow were already negotiating a contract extension for the fifth-year coach.

Things appear to have gone south, though; that dissonance seems to flow from Doeren’s connection to recent job searches at Ole Miss, Mississippi State and Tennessee.

A source informed Wolken that Dave Doeren was very close to becoming the coach at Ole Miss last weekend — the same weekend NC State hosted UNC. According to Wolken, Doeren even had his assistants cancel planned recruiting trips for that Sunday.

However, that deal never came to fruition; interim coach Matt Luke was promoted to full-time status after Ole Miss was victorious in the Egg Bowl over Mississippi State.

After that, Doeren and his representatives started to show interest in the vacancies at Mississippi State (Dan Mullen heading to Florida) and Tennessee (Butch Jones fired).

UPDATE: Joe Giglio of the News and Observer tweeted that reports of Doeren interviewing with Tennessee are inaccurate and reports about the Ole Miss job are overstated.

Reports of Dave Doeren interviewing with Tennessee today are inaccurate. So is the one about "close to taking" the Ole Miss job.

Again, according to my sources, Doeren's preference is stay at NC State but there are some sticking points in the contract negotiations Length of the deal is a big one

The victory over North Carolina gave Doeren his eighth win of the season, which automatically an extension of his contract through 2020. However, another source told Wolken that Yow made an offer to Doeren that would increase his annual pay — and give his assistants multiyear contracts.

That deal, however, appears to be on shaky ground, per Wolken.

It was reported on Wednesday after that that Purdue coach Jeff Brohm, in his first year with the program, would be hired for the Tennessee job.

Tennessee will soon announce the hiring of Purdue coach Jeff Brohm after going 6-6 this year. Brohm was 30-10 at Western Kentucky. Buyout is $5 million, drops to $4 million Dec 5. Still owes Purdue about $750k for leaving WKY.

It’s all obviously a bit cloudy at this point, but that previous report appears to be a bit premature. According to Jody Demling, Brohm is currently on the recruiting trail.

For those asking, Jeff Brohm is in Kentucky recruiting. Visiting two of his Purdue commitments today. Am told talks of a deal with Tennessee are "very, very premature."

This also opens up the possibilty, too, that if Brohm did in fact leave for Tennessee, then Doeren could also express interest in the vacant Purdue job. That, however, is all hypothetical at this point.

NC State basketball: Early-season trends are both promising and problematic