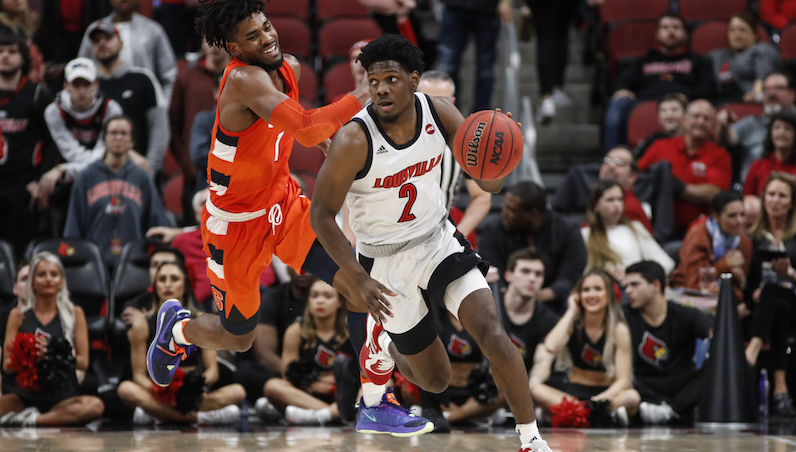 Louisville Basketball will be without several veteran guards when next season rolls around. Earlier this week, Darius Perry entered the NCAA transfer portal. The Cards were already set to be without fifth-year guards Ryan McMahon and Fresh Kimble. Perry’s decision could alter how Louisville staggers its backcourt next year.

Perry spent three seasons at Louisville and appeared in 100 games (40 starts). As Louisville moved on from Christen Cunningham following the 2018-19 season, Perry was first in line to start at point guard. During the 2019-20 season, Perry appeared in all 31 games, making 26 starts. However, Perry’s minutes dipped as the season progress; after averaging 21.3 minutes per game during the month of January, Perry’s playing time dipped to 12.3 minutes per game in February.

I just want to thank the city of Louisville for everything. Greatest fans ever and some of the greatest people ever. Love everybody and I’m going to miss it there. I have made the decision to enter the transfer portal and open up my recruiting I wish Louisville the best ❤️❤️

As of right now, the point guard position at Louisville is set to belong to explosive freshman guard David Johnson. In limited minutes this season, due in part to a shoulder injury, Johnson generated serious interest as an NBA prospect. Currently, the draft process remains in limbo as the NBA (and world) works to get a handle on the COVID-19 pandemic.

Players may have to make decisions on entering 2020 NBA Draft with reality that there could be no opportunity to audition for teams individually, or attend a combine. The unknown certainly extends to college underclassmen. https://t.co/yQ3b3q3Vof

For a prospect like Johnson, who may have been on the fence, this lack of clarity could be what pushes him to return for his sophomore season. If that’s the case, Louisville is set; Johnson is wickedly talented and could carry a roster in 2021.

As he emerged over the back half of the season, Johnson posted an assist rate of 36 percent, while shooting 58.4 percent at the rim. Nearly 70 percent of Johnson’s finishes around the basket came unassisted.

Johnson’s possible return could be of massive importance, especially as Chris Mack enters his third season with the Cards. It’s unfair to think of things in these terms, but with this year cut short, Mack has yet to win an NCAA Tournament game with Louisville.

The Cards are set to lose several key veterans: McMahon, Kimble, Steven Enoch and Dwayne Sutton. All-ACC forward Jordan Nwora and Malik Williams, both juniors, will have to make NBA Draft decisions at some point, too. Nwora, who flirted with going pro last year, seems likely to depart for greener pastures.

If Johnson is back, he becomes the nucleus of the team’s offense. Talented rising sophomore forward Samuell Williamson — a versatile closeout-beater — looks like a strong running mate.

Louisville will also bring in a top-25 recruiting class next season, which includes Jay Scrubb — one of the top JUCO prospects in the country.