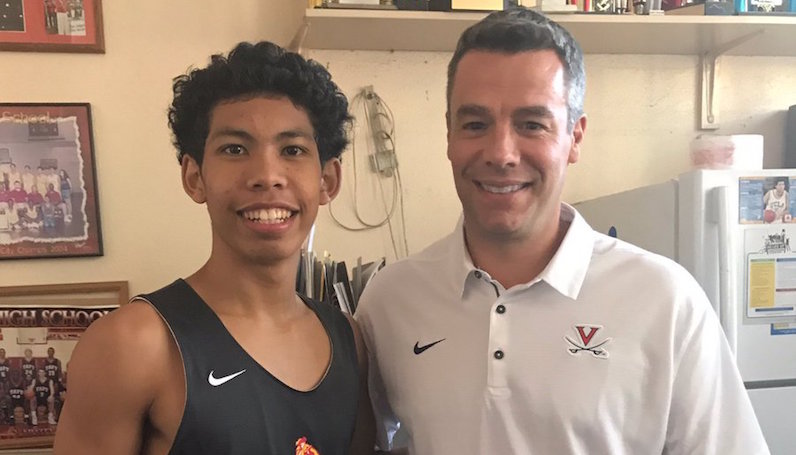 Kihei Clark, a 3-star point guard from California announced his decision to play at UVA and the news was met with skepticism among Wahoo faithful.

The Virginia basketball fanbase’s collective freak out over a perceived lack of recruiting success for Tony Bennett and his staff continued Monday, even as the Cavaliers picked up their second commitment for 2018.

The 5-9, 145-pounder is one of Bennett’s lowest rated recruits since coming to Virginia, ranked No. 333 in his class by 247Sports, and is certainly undersized for the ACC.

But the former UC Davis commit broke out while leading his AAU team to a title at the Peach Jam this summer, and reopened his recruitment. UCLA showed interest, but hadn’t offered when he chose the Cavaliers.

Why Kihei Clark works for UVA

After spending the summer courting, but ultimately losing out on 4 and 5-star prospects and potential McDonald’s All-Americans, some see taking Kihei Clark as the UVA staff settling, perhaps even getting desperate. Perhaps there is a hint of truth to that.

But look at the situation another way. Virginia has four scholarships to work with, and though Clark looks like an undersized late-bloomer, few coaches can match Bennett’s track record for player development and nobody is going to ask Clark to be a star the moment he arrives on campus.

Best case: Clark is the next London Perrantes and develops into exactly the kind of pass-first point guard and leader that fits the UVA system. Worst case: Bennett is using a scholarship on a backup point guard who won’t play much. Every program has guys like that.

Given Bennett’s tendency to redshirt players, it might be quite a while before Clark ever sees the floor. He could certainly use some time to mature physically, but his quickness is impressive and on film he looks like a player who could consistently knock down open looks.

Offensively, the skills are there as a ball handler and distributor, but going against future UCLA guard Jaylen Hands, Clark needed work on defense. Of course, you know he’ll have that drilled into him at UVA.

If the Cavs land Louisiana guard Jared Butler to go with Kihei Clark and Australian wing Kody Stattman, it would shape up to be a nice class that also effectively includes Francesco Baddochi, the 6-7 Italian who will redshirt this season.

It’s not the Fab Five-level, program-changing class some Virginia fans were dreaming of a few months ago, but it fills some of Bennett’s needs.

And it might be important to remember Perrantes and Malcolm Brogdon weren’t really considered program-changing recruits either.

With David McCormack headed to Kansas, where does UVA look next?