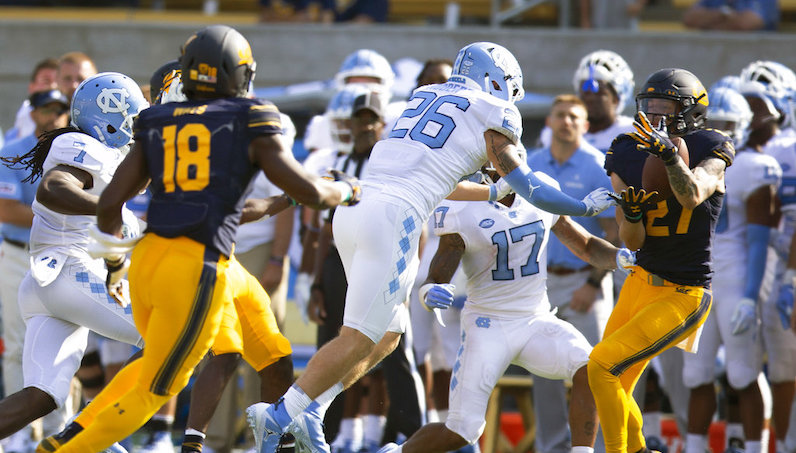 California’s Ashtyn Davis (27) comes down with an onside kick by North Carolina during the second half of an NCAA college football game, Saturday, Sept. 1, 2018, in Berkeley, Calif. Cal won 24-17. (AP Photo/D. Ross Cameron)

As the specter of realignment befalls on major college athletics — once again — it’s impossible to ignore some of the existential threats facing the ACC. Less than a year after Texas and Oklahoma announced plans to leave the Big 12 for the SEC, USC and UCLA made plans to leave the Pac-12 for the Big Ten.

Geography and regional rivalries be damned; TV money and an emphasis on football will dictate the new path forward. This looks to be a harsh new reality for the ACC, a league birthed on basketball and dwarfed in revenue by the Big Ten and SEC. With its grant of media rights as leverage, the ACC must be proactive and airtight with its actions.

As Dodd notes, the proposal, which was crafted by the ACC, is seen as a bridge to increasing each league’s media rights deal with ESPN, a shared broadcast partner with both conferences.

Last August, the ACC and Pac-12 formed a handshake deal with the Big Ten to form The Alliance, which was seen as a way to combat the increased bargaining power of the SEC, following the decisions of Texas and Oklahoma.

Obviously, the literal alliance between the three leagues was faulty — to say the least. However, it’s almost amusing to see the ACC and Pac-12 double-down on that strategy to form a new two-league partnership.

Of course, this proposal has notes of desperation, with plenty of room for concern: the Pac-12 is at risk of losing additional universities to the Big 12. According to other media reports, the Big 12 has targeted Arizona, Arizona State, Colorado, Utah, Oregon and Washington.

The Pac-12’s media rights deal is set to expire in 2024, which complicates matters. Conversely, the ACC’s deal runs through 2036.

For now, the ACC has some level of security thanks to the league of its media rights now, along with its exit fee procedures. However, as the revenue gap widens, the league’s most prominent football programs — Clemson, Florida State and Miami — are viewed as potential flight risks, economically reasonable or not.

Say what you will about dollars and sense, but perception matters. Right now, the ACC is obviously in a tough spot. It’s not enough to simply hold steady with the current structure; that’s stagnation. At this point, staying put is a loss.

Since his arrival, ACC Commissioner Jim Phillips has seemingly had undivided support from the league’s more wealthy stakeholders: university presidents and football coaches. However, he pioneered the charge earlier to not expand the College Football Playoff, a seemingly costly move in more ways than one.

Six months ago the Pac 12 and ACC rejected a golden ticket football playoff plan with automatic bids and a cut of a $1 billion revenue pie. It may go down as the most ill advised decision in college athletics history. https://t.co/J9gn9vtxZf

Under Phillips, the ACC has also been (weirdly) focused on where to locate its headquarters. Despite 70 years of residency in Greensboro, North Carolina, the ACC will consider moving its league offices to Charlotte, North Carolina or (for some reason) Orlando, Florida. This deliberation has now dragged on for 10+ months. Either way, it’s certainly an odd direction to go down, especially with more pressing matters at hand.