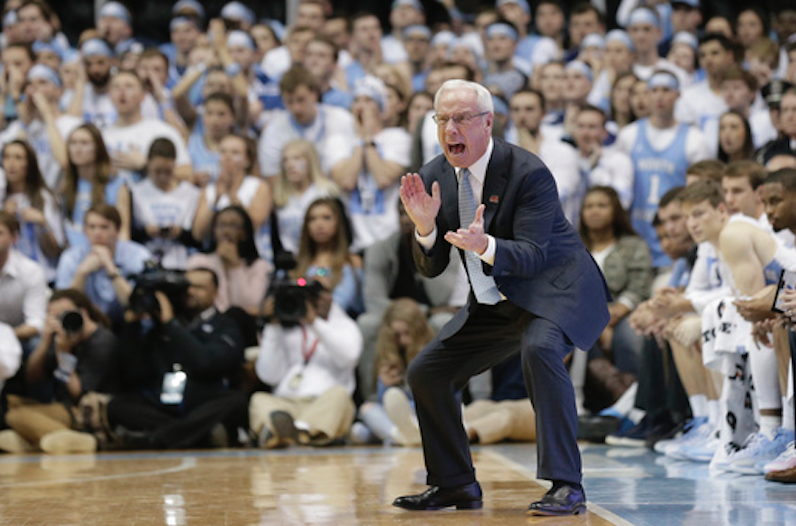 UNC basketball coach Roy Williams might need to get creative to find production in the post. (AP Photo)

North Carolina continues to await word on whether center Tony Bradley stays in the NBA Draft or returns to school. Bradley’s decision will directly impact UNC’s chances of repeating as national champions. But given what’s already returning, the Tar Heels shouldn’t plummet too far next season.

UNC’s biggest strength will be in the presence of its senior point guard, Joel Berry. Berry brings continuity and stability to the Tar Heel rotation, not just with his outside shooting and driving ability, but also with his defense. If the Tar Heels find themselves in the Final Four for a third straight time, it will be largely due to Berry.

The return of Theo Pinson, as well as a healthy Kenny Williams, adds to UNC’s stability along the perimeter. Williams will be a much-needed addition to the Tar Heel lineup with his outside shooting potential. With Justin Jackson’s 37 percent shooting from three-point range gone, UNC needs Williams to step up next season. Pinson isn’t as potent an outside shooter as Williams. However, he’s athletic and plays solid defense. He’ll also be a senior, which carries tremendous weight in Roy Williams’ world.

Along with Berry, Pinson and Kenny Williams, the Tar Heels have a wealth of young guards to work with. The list includes rising sophomores Seventh Woods and Brandon Robinson, as well as newcomer Jalek Felton.

Frontcourt inexperience is going to be one of this team’s biggest weaknesses heading into the season; that will be the case even if Bradley comes back. Bradley would be the only true big man returning to the UNC lineup with legitimate playing experience. Luke Maye has proven to be a versatile player for the Tar Heels, but he’s more of a stretch 4.

Without Bradley, UNC will rely on a trio of freshman post players — Sterling Manley, Brandon Huffman and Garrison Brooks.

Brooks saw the opportunity for early playing time in Chapel Hill, choosing the the Tar Heels after gaining his release from Mississippi State. Manley and Huffman signed with the Tar Heels during the fall. Even if they’re not ready, all three players will have the chance to contribute immediately.

UNC’s trio of freshman forwards will be hard-pressed to match the production of departed seniors Kennedy Meeks and Isaiah Hicks. But if the groups overachieves as a collective unit, the sky will be the limit for the Tar Heels. On the flip side, if UNC’s young big men falter, it’s hard to envision this team cutting down any nets next spring.