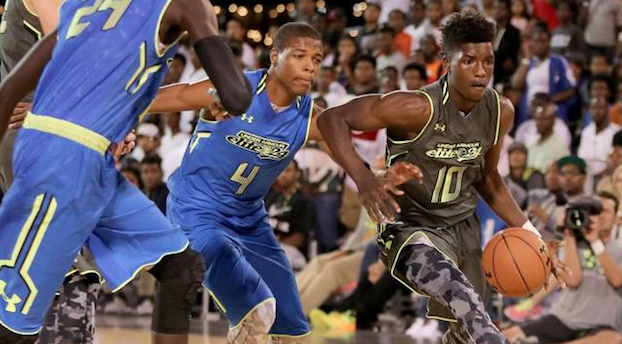 For only the third time in a decade, North Carolina doesn’t have a single McDonald’s All-American among its basketball signees. The only other times that happened in the last 10 years were in 2007, when UNC didn’t sign any prospects, and 2015, when the Tar Heels signed Kenny Williams and Luke Maye.

The UNC signee who has the biggest beef is Jalek Felton — the No. 1 combo guard nationally in 247Sports’ composite rankings.

Felton made a statement in his first contest following the McDonald’s snub. Taking on one of South Carolina’s top prep teams, A.C. Flora, Felton scored 41 points and pulled down 10 rebounds. Shooting a perfect 13-of-13 from the free-throw line, Felton led his Gray Christian squad to a 15-point victory. He had 31 points in the second half alone.

“Things happen for a reason, but I just used it to fuel me coming into this game right here,” Felton said after the game to Lou Bezjak of The State newspaper.

Fellow guard Andrew Platek is a streaky outside shooter who fills a specific niche role for the Tar Heels. While he’s not considered a blue-chip recruit, he’s known for heating up outside the three-point line.

Brandon Huffman, a 6-9 center out of Word of God Academy in Raleigh, N.C., has been a reliable double-double performer throughout his senior season. Huffman will be positioned to see immediate minutes at center behind Tony Bradley.

The same goes for Sterling Manley, the 6-10 center from Ohio. One of the reasons Manley didn’t get a wealth of major recruiting attention was a gruesome broken leg he suffered his junior year. But Manley has proven that he’s back in form, leading his team to a 12-1 start with double-doubles in over half his team’s contests.

Should the Tar Heels land forward target Kevin Knox, the McDonald’s shutout will take care of itself. But in the meantime, the collective snub serves as a significant motivator for UNC’s other incoming freshmen. They have a golden opportunity to exceed expectations and prove wrong those who question their legitimacy as UNC-caliber prospects.