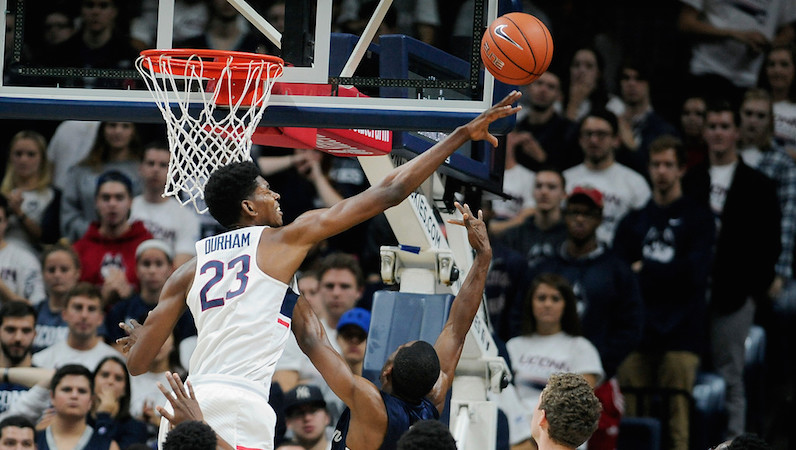 in the second half of a preseason NCAA college basketball game, Saturday, Nov. 5, 2016, in Storrs, Conn. (AP Photo)

Notre Dame added an important piece to its future frontcourt puzzle with the signing of Juwan Durham. The 6-11 power forward arrives in South Bend from Connecticut, where he played as a freshman last season. Durham will have to sit out the 2017-18 season as a transfer. After that, he will have three remaining seasons of eligibility starting in the fall of 2018.

“We are thrilled to have Juwan join our culture,” Irish head coach Mike Brey said in a school release. “He has such tremendous upside. And now that he is fully healthy he can put in the work to improve and reach his potential. We have a track record of guys getting better in our program. I am excited to see him develop.”

Durham was one of the prizes of UConn’s 2016 signing class – a consensus top 75 prospect out of Tampa Preparatory School in Florida. But his freshman season in Storrs wasn’t all that he hoped it would be.

He appeared in 28 games for the Huskies in 2016-17, but averaged just 8.3 minutes per contest. Durham was still recovering from an ACL injury suffered his senior year of high school, which limited him in the early part of the season.

He averaged 1.6 points and 1.5 rebounds an outing, making a minimal contribution to a UConn squad that failed to reach the postseason with a 16-17 overall mark.

Durham’s departure from Storrs was part of a mass exodus of talent from the UConn program this offseason. Fellow Huskies Vance Jackson and Steven Enoch elected to transfer out, with Enoch choosing Louisville.

Despite winning a national championship at UConn in 2014, Huskies head coach Kevin Ollie has struggled of late, failing to reach the NCAA Tournament in two out of the last three seasons. Durham also gave serious consideration to Villanova. But he chose the Fighting Irish because of the potential impact he can make in the Irish frontcourt when he’s eligible.

Notre Dame has lost multi-year contributor V.J. Beachem from its frontcourt rotation heading into 2017-18. They will also be losing Bonzie Colson (a big loss), Martinas Geben, and Austin Torres after the upcoming season.

When Durham becomes eligible in 2018-19, frontcourt depth will be sparse. Only John Mooney and Elijah Burns among Notre Dame’s current forwards will still be on the roster. That opportunity to make a significant impact in his first ACC season should keep Juwan Durham focused over the next several months.