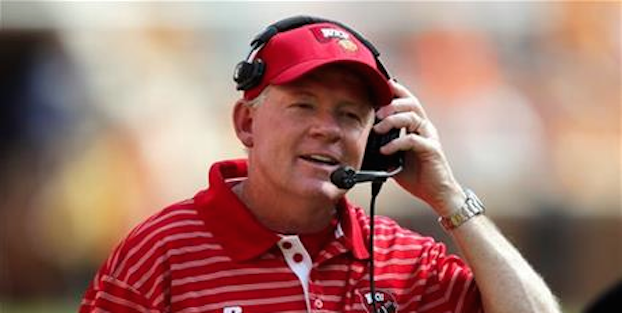 Bobby Petrino and his staff secured a commitment from a consensus 4-star running back on Thursday. (AP Photo)

Louisville has one of the most dynamic offenses in all of college football, led by sophomore Lamar Jackson and senior Brandon Radcliff.

But with Radcliff and Malin Jones finishing their careers this fall, the Cardinals desperately needed to land a talented running back in the 2017 class.

They’ve gotten their man, accepting a commitment from Colin Wilson, a 6-1, 220-pound running back out of Green Cove Springs, Fla. ACCSports.com listed Wilson as the No. 1 overall target on Louisville’s recruiting board prior to his Oct. 19 decision.

Wilson is the highest-ranked prospect in Louisville’s class. He is listed as the No. 229 senior recruit in the nation, per 247Sports’ composite rankings.

Although Jeremy Smith and Malik Williams will enter next spring as the favorites to replace Radcliff, Wilson could earn immediate playing time when he arrives on campus. By 2018, when Smith and Williams depart, Wilson could challenge for the starting job.

Louisville surged to the top of Wilson’s list following a June unofficial visit, which came a month after the Cardinals offered him.

Notre Dame was Wilson’s other finalist, but Louisville had playing time and championship aspirations to offer. Some of the many other schools that Wilson considered included Clemson, Auburn, Alabama, Stanford, Florida and Georgia.

With Wilson on board, Louisville has 23 commitments in the 2017 class. Running back was the most obvious remaining need prior to Wilson’s commitment. The coaches now have the college-ready playmaker for whom they were looking.