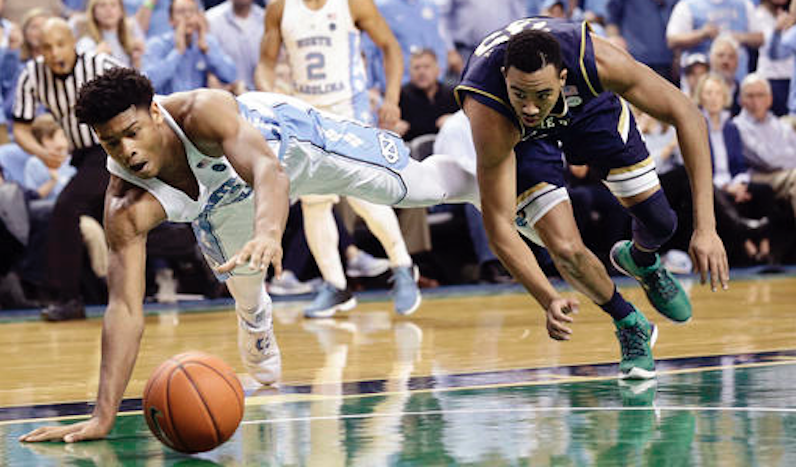 UNC senior Isaiah Hicks (left) is part of a Tar Heel frontcourt that has dominated the glass this season. (AP Photo)

North Carolina has vaulted back to the top of the ACC standings this winter with a balanced, veteran lineup. Roy Williams has nine players averaging 13 or more minutes per game — three seniors, three juniors, two sophomores and a freshman.

With one of the ACC’s top point guards in Joel Berry, a do-it-all wing in Justin Jackson who leads the Tar Heels in scoring and a pair of senior big men in Kennedy Meeks and Isaiah Hicks, UNC can stack up with anyone in the league.

After snapping a seven-game winning streak in a loss at Miami, UNC bounced back with a victory over Notre Dame in Greensboro. The Irish, with four players averaging 14 or more points per game, are one of few teams that can match up with UNC offensively. But they were unable to hold their own on the glass, 44-25.

The Tar Heels will be put to the test in their remaining ACC games. They’ll play home-and-homes with both Duke and Virginia, while also hosting Louisville in the Smith Center. That’s five out of seven games against teams currently ranked in the top 18 of the AP poll.

Duke, of course, has as much talent as anybody in America when the Devils are healthy and playing cohesively. The Tar Heels are a more veteran club this time around heading into Thursday’s showdown in Durham. But Duke is getting its act together, having won three straight.

Virginia is a much stronger defensive club than the Tar Heels. UVA also leads the league in field-goal percentage (49.5 percent). Louisville leads the ACC in field-goal percentage defense (38.4 percent), so the Cardinals are liable to give the Tar Heel shooters fits as well. But can the Cavaliers and Cardinals beat UNC on the boards? That’s the key question for both teams.

UNC also travels to NC State on Feb. 15 for what is always an emotionally charged affair. The Heels will then fly up to Pitt for a Feb. 25 matchup.

Should UNC escape that gauntlet with a winning record, it’ll be right in the thick of things come early March for a second straight ACC regular-season title.