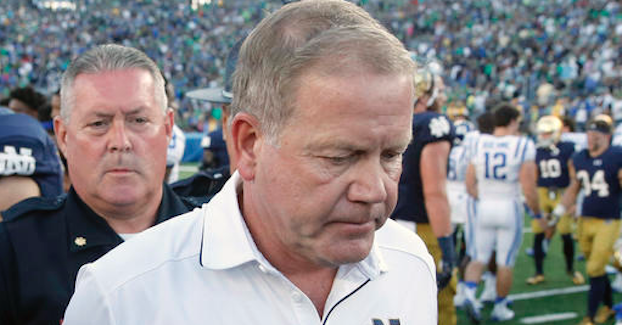 Brian Kelly could be in danger of losing his job if Notre Dame doesn't turn its season around. (AP Photo)

At the beginning of the season, most college football prognosticators would have suggested that Notre Dame would run the table in its five games this fall against ACC opponents. The Irish, after all, didn’t have to travel to, or play, Florida State and Clemson, as they have the previous two seasons. They also avoided Louisville and got to host Duke, Miami and Virginia Tech all in Notre Dame Stadium.

Fast forward a month and a half into the season, however, and the Irish are 1-2 in games against ACC foes, suffering embarrassing losses to Duke and NC State, while slogging defensively through a 50-33 victory over Syracuse in MetLife Stadium in East Rutherford, N.J..

Given the way things have gone so far — and not just on Notre Dame’s side — the upcoming matchups with Miami on Oct. 29 and Virginia Tech on Nov. 19 will likely find the Fighting Irish as underdogs.

The Canes and Hokies won eight of their first 10 combined games this season. Virginia Tech, in particular, is off to an excellent start to ACC play, shutting out Boston College in Blacksburg and dismantling North Carolina in inclement weather in Chapel Hill, allowing just three combined points in the two games.

Although the Canes lost a 20-19 heartbreaker to rival Florida State to fall to 4-1 overall and 1-1 in ACC play, Mark Richt’s squad holds the top spot in the ACC in scoring defense (12.8 PPG allowed) through the first six weeks while ranking second, behind only Louisville, in scoring offense (41.4 PPG) and average yards per offensive play (7.4 yards).

By contrast, Virginia Tech ranks third in in the ACC in scoring offense (39.4 PPG) through five games, while Bud Foster’s defense leads the ACC in yards allowed per game (237.6) and scoring defense (15.6 PPG allowed).

The Irish are staring at a worst-case 1-4 record in 2016 against ACC opponents if they can’t pull it together and win one of these two games against Miami and Virginia Tech. Cries for a coaching change will only grow louder if the Fighting Irish drop four out of five ACC games in the third year of the school’s new scheduling arrangement.

Realistically, with Stanford and USC also remaining on the slate and Navy coming off a stunning victory over previously unbeaten Houston, Notre Dame is in jeopardy of missing a bowl game if it doesn’t capitalize against the ACC.

It’s a stunning reversal of fortunes for a program that was still in the College Football Playoff hunt late last season. But if the Irish fail to bounce back, Kelly’s seat will be scorching by season’s end.