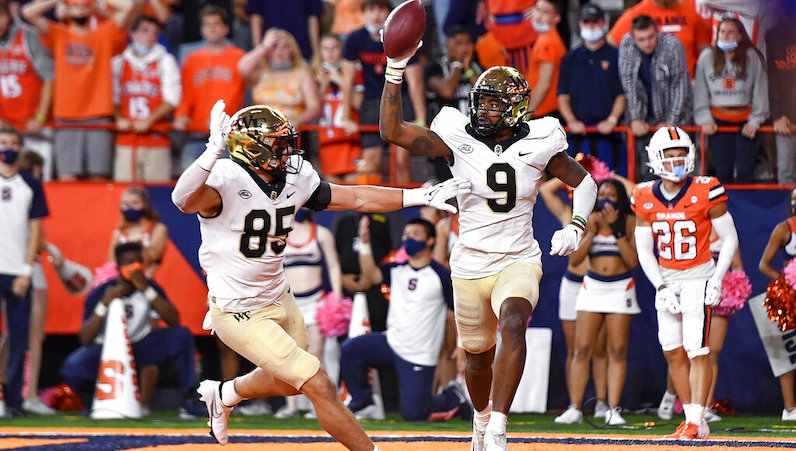 If you were too busy eating seasonally-appropriate baked good this weekend to catch all the ACC football action, we’ve got you covered.

This week’s ACC Football Power Rankings are out! Make sure to check those out here.

Wide receivers seem to grow on trees in Winston-Salem. Jacquarii Roberson garnered preseason All-ACC honors and showed why with nine catches for 135 yards vs. Syracuse. Taylor Morin has had some nice moments; Donavon Greene would have been a returning starter had he not sustained a season-ending injury in the offseason.

Then there’s A.T. Perry, who only caught three balls in Wake Forest’s overtime win in the Dome. The three catches all went for touchdowns (somebody call Cris Carter), went for 137 yards and included the catch of the weekend to send the Deacons to 6-0.

Speaking of comebacks, Virginia trailed Louisville 30-13 late in the second half on Saturday. However, the ‘Hoos roared back behind Armstrong — winning 34-33 on the road.

Armstrong throw for 487 yards on 40-of-60 passing; he finished his performance with a 1-yard touchdown toss to tight end Grant Misch with 22 seconds left, which proved to be the game-winner

North Carolina suffered a disappointing home loss to FSU on Saturday, but wide receiver Josh Downs was superb, once again. Downs hauled in a career-high nine receptions for 121 yards and another touchdown. The sophomore receiver has seven touchdown catches on the season, including at least one in every game. Jordan Addison (nine touchdowns) is the only ACC receiver with more touchdown grabs this season, so far.

Downs ranks No. 3 in the FBS in total receiving yards, too: 741. That number is tops in the ACC by a wide margin. Virginia’s Dontayvion Wicks is second in the league with 551 receiving yards, nearly 200 fewer than Downs.

Going back to the 2000 season, only nine ACC quarterbacks have thrown three or more touchdowns on 15 or fewer pass attempts, while also rushing for a touchdown, in the same game. That’s exactly what Jordan Travis did for Florida State in a come-from-behind win over UNC.

Travis completed 11-of-13 for 145 yards and three touchdowns. Travis also ran 121 yards and two scores, too.

The last time a North Carolina defense allowed an opposing quarterback to hit these benchmarks in the same game was back in 2014: Jacoby Brissett and NC State.

Mack Brown’s problems against the Florida State Seminoles continued on Saturday afternoon. Brown, a 1974 graduate of FSU, has now lost all 11 meetings with his alma mater.

Earlier this year, Brown just turned 70 years old. So unless there is a change to the ACC’s scheduling format, it’s uncertain Brown will get another shot at his first win against the Noles.