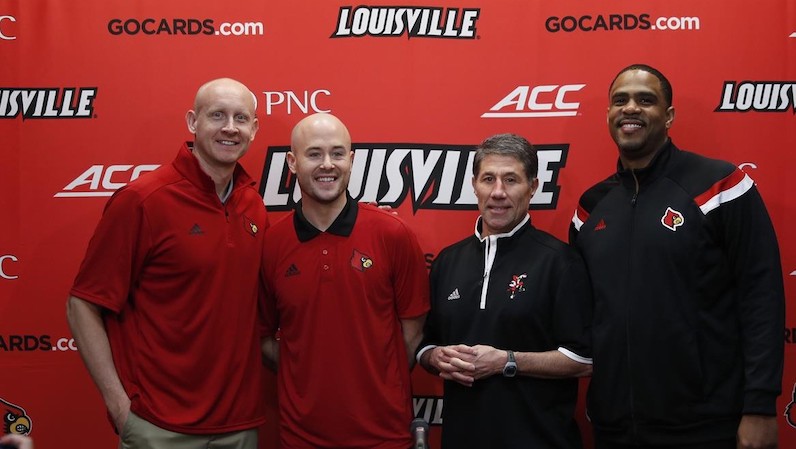 Louisville basketball continues to experience seemingly unprecedented off-court controversies. Tuesday afternoon, reports started to circulated that something fishy was happening around the program. Amidst a great deal of speculation, news broke that former assistant coach Dino Gaudio was federally charged with extortion — on two counts.

Gaudio reportedly attempted to extort money from the University of Louisville, while threatening to go to the media with potential recruiting violations. According to the charges, Gaudio wanted 17 months of salary to not report the violations.

Gaudio extorted money from UofL, threatening to tell the media about recruiting violations, according to the charging document.

Following the end of Louisville’s 2020-21 season, head coach Chris Mack stated that changes could come to his staff. Shortly after those comments, it was announced that assistant coaches Dino Gaudio and Luke Murray wouldn’t have their contracts renewed for the 2021-22 season.

The decision to let go of Gaudio come on March 18. During an in-person meeting with school officials on March 17, Gaudio made his extortion effort. The comments were recorded, which is now extremely problematic for Gaudio.

Additionally, Gaudio sent a text to officials on March 17 that involved the same threats. According to the government, that text traveled outside the state of Kentucky. This adds another layer of issues, on a federal level; the former coach was charged with interstate communication with intent to extort.

Murray subsequently joined Danny Hurley’s staff at UConn. However, it’s clear that Murray — who followed Mack to Louisville in 2018 — was caught off-guard by the decision.

In fact, the timing of this news is incredible: this comes literally one day after Louisville introduced its newest assistant coach — Ross McMains.

This is also quite the turn in the long-standing relationship between Mack and Gaudio, which goes back nearly 30 years. Mack played college basketball at Xavier in the early 1990s for Skip Prosser when Gaudio was one of his top assistants.

Mack and Gaudio would eventually work on the same staff at Xavier as assistant coaches, and then later at Wake Forest (2001-04) under Prosser.

When Mack was hired by Louisville in 2018, Gaudio praised the decision in an interview with David Glenn of The ACC Sports Journal. A few weeks after that interview, Gaudio joined Mack’s staff.

Along with the university, Mack released a statement on Tuesday. In that release, Mack states that he will cooperate fully with authorities in the upcoming investigation.

During his time at Louisville, Mack’s teams have gone 57-28 (.671). Mack is entering his fourth season with the program, following a disjointed 2020-21 campaign. Competing amidst the COVID-19 pandemic, the Cards went 13-7 and missed the 2021 NCAA Tournament.

Louisville’s 2021 recruiting class has been a bit of a mess, too. Eric Van Der Heijden and Bobby Pettiford, two 2021 prospects who signed with Louisville, were released from their Letters of Intent in late March. Pettiford will head to Kansas now, while Van Der Heijden is bound for Ole Miss.

Bryce Hopkins, a 4-star forward, initially committed to Louisville before flipping to Kentucky, too.

Mack has yet to win an NCAA Tournament game since his arrival at Louisville. Of course, that’s a harsh metric to use; the 2020 event was cancelled because of the virus.

When Mack arrived at Louisville, it was on the heels of two other major storm surrounding the program and the sport at large.

First, there was the 2017 sex scandal — when the NCAA Committee on Infractions found the Louisville program to have committed a variety of violations, including “arranging striptease dances and sex acts for prospects, student-athletes and others.”

That was followed by the federal bribery probe into major college basketball, which touched Louisville basketball, too.

These incidents predate Mack, but it speaks to just how challenging the last 4-5 years have been for this program.