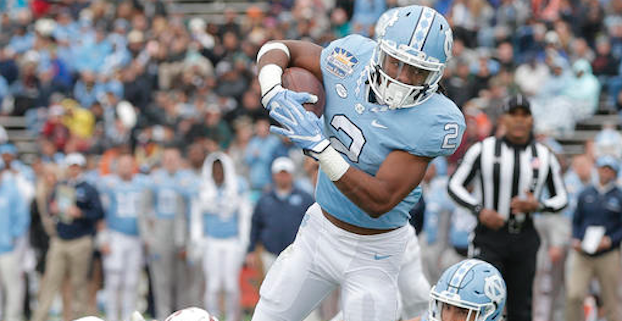 Jordon Brown will be among the players competing for carries in UNC's backfield this fall. (AP Photo)
Training camp opens for North Carolina with no clear-cut successor to Elijah Hood and T.J. Logan. The Tar Heels welcome back sophomore Jordon Brown as the only experienced running back in UNC’s system. Brown, along with a transfer and a true freshman, will platoon until a leader emerges.
Brown’s freshman stats weren’t earth-shattering (45 yards in 20 carries, one catch for 15 yards). But what was more important for Brown was the experience. He won’t have the same jitters this time around, now that he’s done it before.
Former Auburn running back Stanton Truitt made his way to Chapel Hill in time for spring ball, and will be in the mix along with Brown.
Truitt averaged six yards a carry last season at Auburn, though he found himself in a backup role. Along with his ability as a rusher, Truitt averaged 14.3 yards a reception a year ago, including a 45-yarder.
While Brown may have the slight edge on Truitt as far as playing games in UNC’s spread offense, Truitt is the more experienced college running back. Truitt and Brown are leading the pack heading into August. But both players will have to fend off Michael Carter, a true freshman January enrollee.
Carter saw the opportunity at UNC to play immediately, committing at Fedora’s Freak Show prior to his senior season. Carter was named Mr. Football in the state of Florida at the 6A level last fall after rushing for over 2,500 yards and 45 touchdowns.
As a necessary precaution, UNC sat out Truitt and Brown in its spring game. Carter, in his first action at Kenan Stadium in a game simulation, had nine carries for 31 yards.
Over Larry Fedora’s five seasons in Chapel Hill, only one running back has gotten 200 carries in a single season. That was Hood, who had 218 carries in 2015 on his way to a breakthrough 1,463 yard, 17 touchdown year. Only one other running back in the Fedora era – Giovani Bernard in 2012 – eclipsed 150 total carries in a single season.
As in past years under Fedora, the Tar Heels will employ a variety of backs. In each of Fedora’s first three seasons at UNC, the Tar Heels had at least three running backs with 60 or more carries each season. A similar scenario is likely in 2017, as the program rebuilds in the offensive backfield again.