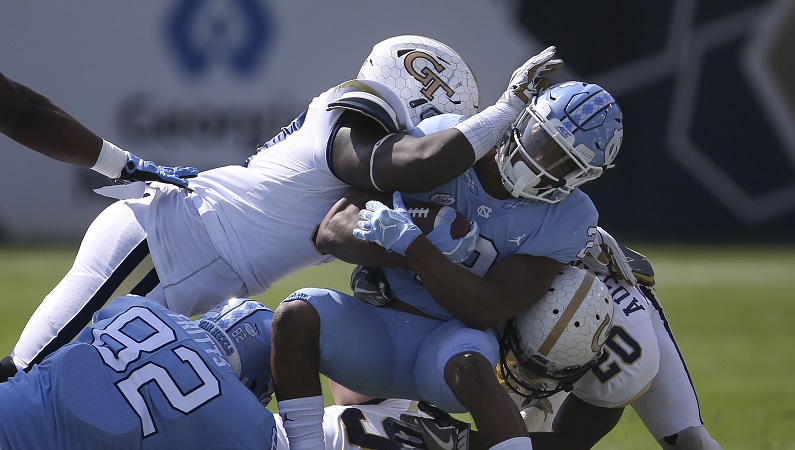 North Carolina running back Jordon Brown (2) is tackled by Georgia Tech linebacker Brant Mitchell (51) and Georgia Tech defensive back Lawrence Austin (20) in the first half of an NCAA college football game Saturday, Sept. 30, 2017, in Atlanta. (AP Photo/John Bazemore)
North Carolina’s chances of returning to the postseason this December took a dramatic hit with its 1-4 start. The Tar Heels needed victories over Cal and Duke to pad their bowl resume in light of a difficult slog in October and November.
To reach a bowl, the Tar Heels have to finish out 5-2 in their final seven contests. Where will those five wins come from?
There’s only three remaining opponents on Carolina’s schedule – Virginia, Western Carolina, and Pittsburgh – in which UNC has a chance of being favorites. Victories in those three contests finishes the Tar Heels out at 4-8 – two wins short of bowl eligibility.
UNC has to play Notre Dame, Virginia Tech, and Miami in October. They’ll also host Virginia in Chapel Hill Oct. 14. The Tar Heels will not be favored against the Fighting Irish, Hokies, or Hurricanes. And given UVA’s solid 3-1 start, it’s not a sure thing that UNC will roll over the Cavaliers for the eighth straight season, either.

If the Tar Heels go 1-3 in October, the 2-7 start will kill their bowl chances even before November arrives. In other words, UNC is going to have to upset at least one opponent among Notre Dame, Virginia Tech, and Miami in the next five Saturdays to have a shot at a 13th game.
UNC opens November with a pair of winnable games at Pittsburgh and at home against Western Carolina before closing out with NC State in Raleigh Nov. 25. If Carolina can pull an October upset and knock off Pitt and Western Carolina, it positions them to come into Carter-Finley Stadium with a 5-6 record, and bowl eligibility at stake.
Bowl eligibility is probably one of the last things Larry Fedora wants to talk about right now.
Given Carolina’s rough start and the loss of 13 scholarship players to season-ending injuries, memories of Jim Mora can be conjured up.
“Bowl game? Bowl game? I just want to get another win.”
If one of the reporters covering the Tar Heels has the guts to ask Larry Fedora about bowl eligibility in the coming weeks, it’s possible they may get such an answer in response.
All hope is not lost for UNC. But they’ve got to find a way to pick up at least two wins in the next five weeks to make November meaningful. Otherwise, they’ll be taking on NC State in the regular season finale with nothing but pride at stake.