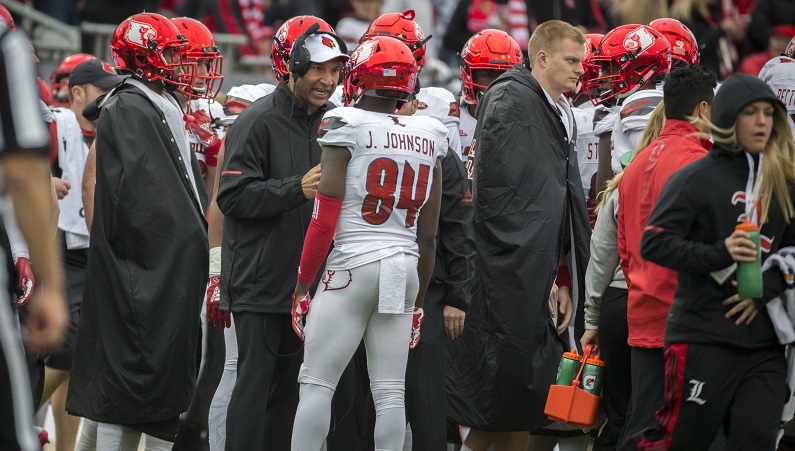 2017 was another banner year for offenses around the ACC. Four ACC programs – Louisville, Wake Forest, Syracuse, and NC State – ranked in the top 25 nationally in total offense. Louisville finished the season ranked third nationally in average offensive yards per play, as well as average yards per game. Seven ACC schools in total averaged more than 405 yards of offense per outing.

In a league filled with brilliant offensive minds, who are the ACC’s top offensive coordinators?

Ruggiero may be the most underrated offensive coordinator in America. At Bowling Green, prior to his arrival in Wake Forest, Ruggiero led the Falcons to a top five offense nationally. Prior to that, at Kansas State, Ruggerio helped mold Josh Freeman into a first round NFL Draft selection in 2009.

At Wake Forest, where the recruiting disadvantages to its ACC rivals are well-known, Ruggerio led the Demon Deacons to the league’s top scoring offense this past fall (36.3 ppg). Ruggerio molded quarterback John Wolford into one of the more efficient quarterbacks in America. Wolford was also the only ACC quarterback to rank in the top 25 nationally in pass efficiency. He also became the first quarterback in NCAA history with 35 all-purpose touchdowns to throw six or fewer interceptions in a single season.

The Demon Deacons ranked second in the ACC in passing offense, averaging 284 yards through the air, while ranking fith in rushing yardage with an average of 192.6 yards per outing. Louisville was the only other ACC school to rank in the top five in both passing and rushing offense. Only Louisville’s 7.4 average offensive yards per play outdid Wake Forest’s per-play average of 6.4 yards. A big part of Wake’s offensive improvement in 2017 was due to the development of the Demon Deacon offensive line, which tied for third in the ACC by allowing just 18 sacks in the regular season. Ruggiero will be put to the test in 2018 with Wolford graduating. But with only two seniors departing – Wolford and tight end Cam Serigne – and the entire offensive line projected to return, the Deacs should be a highly-productive offense again in 2018.

Galloway makes the cut due to Louisville’s staggering offensive numbers in his two seasons with the Cards. With 2016 Heisman Trophy winner Lamar Jackson running the show, U of L has led the ACC in total offense each of the last two seasons. The Cards averaged a whopping 515.7 yards per contest this fall, ranking second in the ACC in rushing offense (231.7 ypg), and third in passing offense (284 ypg). In his first stint in the ACC at Wake Forest in 2011, Galloway helped the Demon Deacons set a school record for passing yardage. He also helped develop Chris Givens into the ACC’s leading receiver, and a first round NFL Draft selection. Galloway also developed Tavon Austin into an NFL wideout during his time at West Virginia. Galloway will be hard-pressed to repeat Louisville’s 2016 and 2017 offensive totals with Jackson entering his name into the 2018 NFL Draft. But it will be a good test for Galloway to prove that he indeed ranks among the ACC’s top offensive masterminds.

Scott and Elliott, Clemson’s youthful offensive tandem, deserve a tremendous amount of credit for taking the reins of Clemson’s offense following the departure of Chad Morris, and shooting it into the stratosphere. Granted, the pieces were already in place for the Tigers through outstanding recruiting. But it was Scott and Elliott who groomed DeShaun Watson into a two-time Heisman Trophy finalist. It was Scott and Elliott who pushed Wayne Gallman into becoming the best running back in the ACC. In 2016, as the Tigers won the school’s second national championship, Clemson ranked 12th nationally in total offense, generating a whopping 5,009 passing yards in 15 games.

Even after losing Watson, Gallman, Mike Williams, Jordan Leggett, Artavis Scott, Jay Guillermo, and others from its 2016 offense, the Tigers still managed to finish fifth in the ACC in total offense in 2017. The Tigers ranked fourth in the league in rushing, averaging 201 yards on the ground per contest, whie ranking second in pass completion percentage (64.7 percent). With most of its offensive firepower returning, including starting quarterback Kelly Bryant, the Tigers have a chance to emerge once again as one of the ACC’s top offenses in 2018.