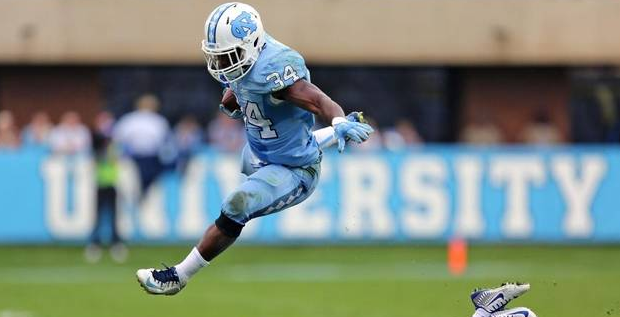 “Should I stay or should I go now?” It’s more than just a line from a 1982 song by The Clash, which was paid homage to in Season 1 of 2016’s breakout Netflix hit Stranger Things. It’s also a question that must be asked annually by the best college athletes in America: stay in school for another year, or head to the NFL, NBA or MLB drafts.

North Carolina wrapped up its regular season in disappointing fashion last Friday with a 28-21 home loss to NC State. UNC has a strong senior class, headlined by wide receiver Ryan Switzer, but the Tar Heels featured some of the ACC’s top underclassmen in 2016, too. Over the weekend, a few players took to Twitter to dispel rumors or perhaps stoke the flames on whether or not they’ll depart for the NFL Draft.

First up: running back Elijah Hood — who made sure to let fans know that he hasn’t announced any decision just yet; he followed that up 10 minutes later with a poll question. To the surprise of absolutely no one, his followers overwhelmingly think that he should return to Chapel Hill for one more trip around the sun.

I haven't announced anything 🤔

What do y'all think I'm gonna do?

Hood carried the ball 145 times this season for 858 yards (5.9 per carry) and eight touchdowns; he also caught a career high 25 passes.

Over on the defensive side of the ball, lineman Naz Jones announced Sunday morning that he, in fact, hasn’t declared just yet what he plans to do.

Hold on just a second ppl. Nothing is official

Lesson Learned: timing is everything

This came after a Tar Heel Illustrated story, published on Saturday, that claimed Jones was planning to leave after this season. It referred to what appears to be a since-deleted Instagram post from Jones.

Jones, who recorded a team-leading 7.5 tackles for loss this season, then followed all of this with a retweet of Gucci Mane about how listening is the best method of learning, which is some profound stuff.

Sticking on the defensive side of the ball, safety Donnie Miles — he of 100 total tackles this season — hinted that he was also perhaps considering his professional options.

Sometimes you just need time to take a step back and think.

Keep your phones close, and stay turned. Nothing out of Mitch Trubisky and M.J. Stewart on Twitter just yet, though.