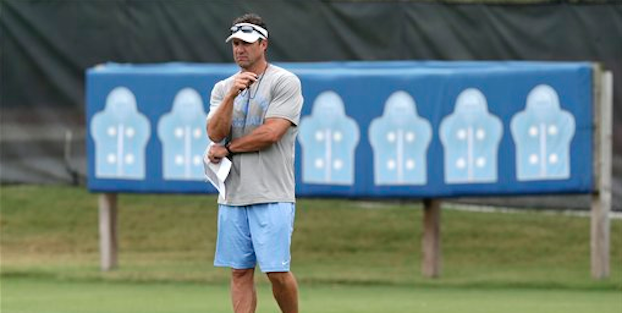 Larry Fedora said in July that Caleb Henderson may have had the strongest arm of all UNC quarterbacks. (AP Photo)

North Carolina quarterback Caleb Henderson is transferring out of the program, according to a report by TarHeelIllustrated.com. Henderson, who later confirmed the news on Twitter, entered preseason camp in a competition for the No. 2 spot on the depth chart.

A redshirt sophomore, Henderson was a consensus 4-star recruit when he signed with the Tar Heels in 2014. He played in two games last fall as a third-stringer, and his lone pass attempt fell incomplete.

Larry Fedora stated at this year’s ACC Football Kickoff that he would name the No. 2 quarterback once a player won the job. He commended Henderson for his arm strength, noting that he had possibly the strongest arm on the team, and stated that Elliott was quickly able to pick up on the offense.