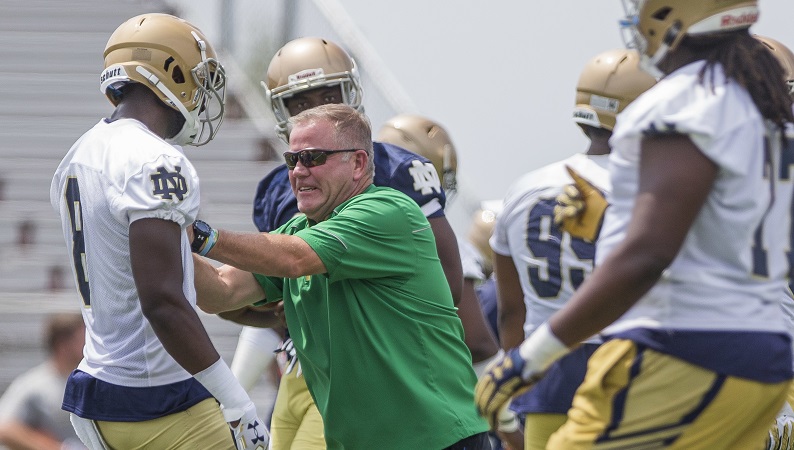 As usual, Notre Dame has several tough matchups in its schedule. But how would the Fighting Irish do if they were in the ACC this fall?

In a year that Notre Dame must improve to save Brian Kelly’s job, the Irish avoid confrontations with Florida State and Clemson, the Atlantic Division’s best two teams. They also avoid Virginia Tech and Georgia Tech, two of the favorites in the Coastal Division race.

Notre Dame’s three Atlantic Division opponents are Boston College, N.C. State, and Wake Forest, The Irish will be favored to win all three of those matchups. Along with Syracuse, the Eagles, Wolfpack, and Demon Deacons traditionally occupy the bottom four spots in the Atlantic Division.

With Mike Elko, formerly of Wake Forest, leading the defense, the Irish are looking to make dramatic strides slowing down opposing offenses this fall. Elko should be especially savvy as far as shutting down his former team, Wake Forest. Elko helped recruit much of the personnel. He also knows what makes Dave Clawson tick on gameday after working with him in Winston-Salem and at Bowling Green. Elko’s knowledge of N.C. State and Boston College, having coached against them for three years each, should also greatly aid Notre Dame in those matchups as well.

The Irish play a pair of road contests at Miami and North Carolina, and do not host any Coastal Division teams in South Bend this year. The Canes were predicted by the ACC’s media in July to claim the Coastal Division crown, which would be the first for Miami since joining the ACC. Miami is the only one of Notre Dame’s five ACC contests in which the Irish may be the underdog heading in.

The Irish won their first three games against Coastal Division opponents after starting their new scheduling arrangement with ACC schools in 2014. They defeated North Carolina in South Bend in 2014, and knocked off Georgia Tech and Pittsburgh in 2015. In 2016, the Irish suffered narrow defeats to Duke and Virginia Tech, while beating Miami.

Despite Elko’s presence, if Notre Dame was in the ACC’s Atlantic Division, they would enter the season projected either third or fourth, alongside Louisville. Coming off a 4-8 season, the Irish wouldn’t be projected to surge over Florida State or Clemson in the eyes of objective prognosticators. But that’s not to say they couldn’t finish higher. After taking their lumps last season, the Irish return 15 starters this fall.

The Irish would have a significantly better chance to win the Coastal Division, which once again is a free-for-all heading into the new season.

Although the Nov. 11 matchup in Coral Gables doesn’t have the same luster as those 1980s Miami-Notre Dame showdowns in the Orange Bowl, it would play a decisive role in the Coastal Division race if the Irish and Hurricanes were both competing for it.