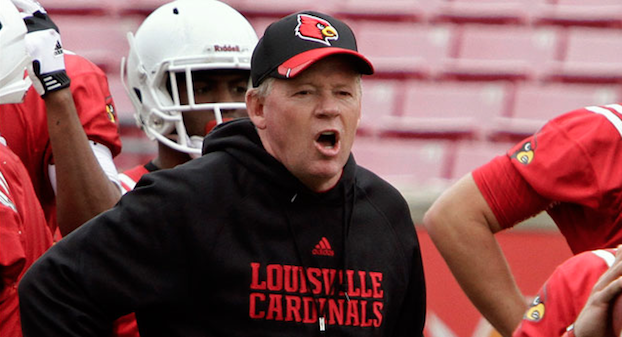 Louisville and Bobby Petrino have agreed on a seven-year contract extension for the head football coach, the school announced Thursday.

Petrino, who began his second stint as the program’s head man in 2014, will now be under contract until 2023. The Cardinals finished 9-4 in 2014 — their first season in the ACC — before finishing with an 8-5 mark last fall.

According to the Courier-Journal, the contract will be worth up to $30.625 million. Petrino’s base pay in 2016 will grow to $3.875 million and will be raised by $50,000 each year moving forward before additional incentives.

Per the report, Petrino would still owe the school $10 million if he left, and that buyout drops to $5 million in his final two years.

“I’m thrilled with the job that Bobby has done here, and it’s been great to have his wife Becky, their children and three grandchildren back in the city of Louisville,” athletic director Tom Jurich said. “Bobby has done an excellent job reinforcing our commitment to academics and career development.”

Louisville started off its 2015 campaign with an 0-3 record before winning six of the following seven games. The team capped off the year with a 27-21 win over Texas A&M in the Music City Bowl.

Petrino has a 100-39 record as a head coach at the collegiate level. Between stops at Louisville (twice), Arkansas and Western Kentucky, 10 of his 11 teams have finished with winning records.

The 55-year-old is the second coach in the ACC’s Atlantic Division to get a contract extension this week. On Tuesday, Clemson announced a new six-year deal for Dabo Swinney.