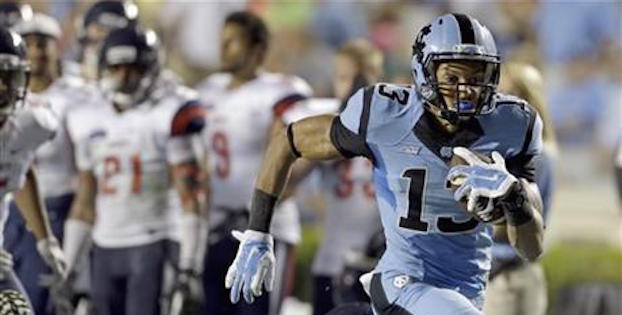 Mack Hollins led the nation in yards per reception in 2015 (AP Photo).

It’s one of the most overused cliches in the football lexicon, but it’s cliched for a reason — it carries merit. A truly elite offense usually has at least one player that can “take the top off the defense.” This is the receiver who, regardless of coverage or defensive scheme, can beat their defenders down the field for chunk-yard plays. For the last three seasons, North Carolina has deployed one of the best deep threats in all of college football: Mack Hollins.

It was announced this morning that Hollins broke his collarbone in the win at Miami, which will unfortunately cost him the remainder of his senior season at the school. It won’t be easy to duplicate Hollins’s ability to swing a game on the perimeter.

After spending most of his freshman season (2013) on special teams, Hollins — a former walk-on — became an integral part of UNC’s uptempo offense undead head coach Larry Fedora. He had four touchdown receptions on the season, which was tops on the team — something he’d become known for the last three years in Chapel Hill. He caught eight touchdown receptions in both the 2014 and 2015 seasons, which also led the team. His 20 career touchdown catches rank third all-time in schools history — behind only Quinshad Davis, his former teammate, and Hakeem Nicks.

He will finish his career No. 1 in the program’s history for yards per catch (20.6) — two yards better than his closest competitior (Octavus Barnes). This gets to the root of why Fedora’s club will miss Hollins so much: his deep ball skills. In 2015, Hollins was named second team All-ACC, and led the nation with 24.8 yards per reception — a UNC school record that will be nearly impossible to usurp. He averaged 17.5 yards per catch as a sophomore (fifth in the ACC), and was averaging 19.3 yards this season (fifth in the ACC). Hollins’s ability to stretch a defense was unmatched by most of his peers.

To read more on who UNC will look to in the absence of Hollins, sign up for basic access to ACCSports.com.