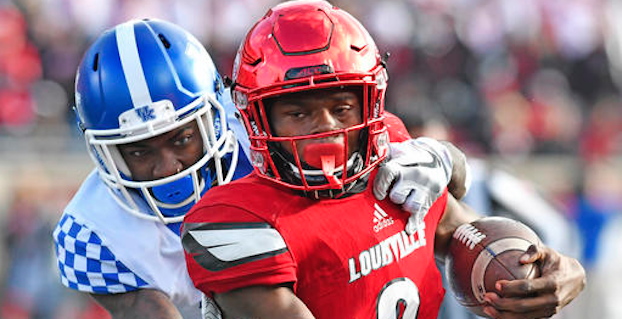 The “what-if” game can be crushing, and it’s something that has to be weighing on the minds of Louisville fans as the holidays approach. This particular “what-if” scenario has everything to do with what the Cardinals’ postseason picture would look like had it won its last two regular-season games.

Would Bobby Petrino’s squad, with only a six-point loss to Clemson blemishing its résumé, have leapfrogged past Washington and into the College Football Playoff?

Louisville positioned itself for playoff consideration heading into its Nov. 17 game at Houston. But the Cardinals appeared lost and uninspired against the Cougars as their CFP hopes were dashed, 36-10.

Prior to the Houston debacle, which was followed by a stunning defeat to rival Kentucky, the Cards were in the mix. They ranked ahead of Washington at that point after the Huskies lost to USC.

Louisville’s résumé would have looked strong had the Cardinals beaten Houston the way the Cougars beat them. That would have looked nice next to victories over Florida State, NC State, Boston College and Wake Forest, who are all preparing for bowl games.

But would the playoff committee have placed more weight on Washington’s Pac-12 Championship Game win over Colorado? Or would Penn State’s victory over Wisconsin in the Big Ten Championship Game help the Nittany Lions trump Louisville’s résumé?

There were plenty of cries around college football before the Big Ten title game that James Franklin’s squad should’ve gotten consideration for the playoff over Ohio State. While the Buckeyes lost one fewer game than Penn State in the regular season, the Nittany Lions won the head-to-head matchup, as well as the conference championship.

This year it all worked out symmetrically, with four Power 5 schools finishing either undefeated or with one loss. At the same time, the CFP committee placed enough weight on the Ohio State-Michigan matchup — featuring a pair of 10-1 teams going in — to essentially make it a de facto national quarterfinal game.

That lends credence to the idea that Louisville would have gotten a fair shake as a fourth CFP participant at 11-1. Even if it meant leaving out an 11-1 conference champion such as Washington.