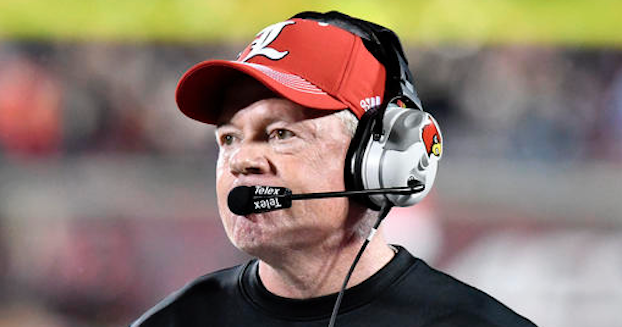 Bobby Petrino maintains that he was unaware of anyone on his staff receiving information from Wake Forest radio analyst Tommy Elrod. (AP Photo)

Unlike several of the teams ahead of it in the rankings, Louisville doesn’t have a lot of major obstacles left in its path. The Cards have a favorable ACC schedule down the stretch, with road games at Virginia and Boston College, as well as a final league home game against Wake Forest.

Louisville’s game at Houston on Nov. 17 will look good on the Cards’ CFP resume should they take care of business.

Should Louisville run the table, it would finish out 11-1, with a 42-36 loss at Clemson being the only blemish on its record.

While Alabama has been nearly invincible since winning last season’s national title, Michigan has slowly pushed its way up to No. 2, beating Penn State and Wisconsin along the way. But the Wolverines have some difficult road tests coming up against Iowa and Ohio State.

Unfortunately for Bobby Petrino’s club, an ACC title is a long shot. Clemson is unlikely to lose two games between now and the end of the regular season, which would be needed for the Cards to represent the Atlantic Division in the league title game. But should the Tigers have an ugly loss down the stretch and then lose in the ACC Championship Game, Louisville could leap-frog them.

Louisville may have to hope for a letdown on the part of Washington, which has played its way back into the national championship conversation for the first time in a quarter of a century.

All Louisville lovers will be big Utah fans on Saturday night as the Huskies travel to Salt Lake City to take on the 7-1 Utes.  But Washington has other trouble spots as well in November, including a game against an improving Southern Cal squad and its regular-season finale against Washington State.

Plenty of people on the West Coast will cry foul if two ACC teams make the CFP while a Pac-12 school misses out for the second straight year. But taking a look at Washington’s nonconference schedule — wins over Idaho, Portland State and Rutgers — and comparing it to Louisville’s nonconference matchups against Charlotte, Marshall, Houston and Kentucky, the Cardinals will have a case if both schools have one loss.