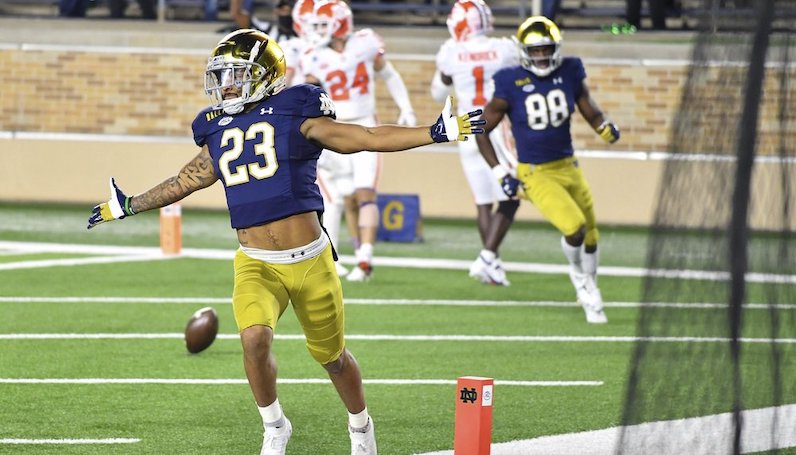 Every week during the 2020 football season we highlight five ACC rookies that put together standout performances. This edition is led by Kyren Williams, who continues to work the engine room for Notre Dame’s offense, and Clemson’s DJ Uiagalelei.

There’s a lot of credit to go around for Notre Dame after last week’s win over No. 1 Clemson; however, Kyren Williams may have been the MVP.

With Clemson missing several defensive starters up front, Williams carried the ball 23 times for 140 yards (6.1 per carry) and three touchdowns; all of which are career highs. Williams may not be a game-breaker from the running back position (only 5 carries of 20+ yards this season), but he’s steady and efficient.

Moreover, Williams was phenomenal all night against the Tigers picking up blitzes.

Could I interest you in a small compilation of @Kyrenwilliams23 pass blocking? pic.twitter.com/xZAr87biEj

In a game that went to over time, Ian Book was sacked just twice — with four quarterback pressures. Notre Dame averaged nearly 6.6 yards per play.

Once again, quarterback DJ Uiagalelei filled in brilliantly for Trevor Lawrence — this time on the road against a top-five opponent. Uiagalelei threw for 439 yards and recorded three more total touchdowns.

Uiagalelei’s mix of size, power and arm skills makes him a really intriguing threat in the RPO game for Clemson.

Star in the making.

Over on the other side of the ball: Bryan Bresee posted another strong outing along the defensive line. Bresee collected two tackles, including one for a loss, his second straight game with a tackle for loss.

Unfortunately, Bresee suffered a knee injury while making a stop in overtime, which forced him to exit the game. On Monday, though, Dabo Swinney announced that there’s no ligament damage for Bresee.

Surprise, surprise: With Kenny Pickett back under center, Jordan Addison continued to strike fears into an opposing secondary. Addison hauled in 11 receptions — a single-game career high — for 127 yards. Five of Addison’s catches went for first downs, too.

Back in the lineup after missing the loss to Wake Forest with an injury, Sean Tucker put forth another strong effort in near-win over Boston College. Tucker went for 86 yards from scrimmage on 13 touches — good for 6.6 per touch.

For the season, Tucker averages just under 81 yards from scrimmage per game.