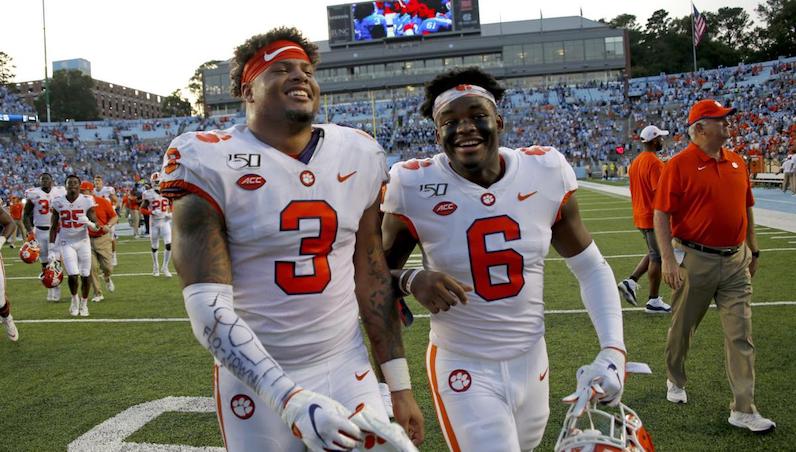 Clemson’s Xavier Thomas (3) and Mike Jones Jr. (6) celebrate after a failed North Carolina two-point conversion in the closing moments of the Tigers’ 2019 win in Chapel Hill. Jones has been a leader of a Clemson player movement to honor the legacy of George Floyd with a campus demonstration. (Chris Seward/AP Photo)

By this point, it’s common knowledge that All-World quarterback Trevor Lawrence (COVID-19) won’t suit up for Clemson this Saturday at Notre Dame — a top-5 matchup in the ACC. DJ Uiagalelei will make his second career start. However, the Tigers will be without several key defenders, too.

Veteran linebacker James Skalski (groin) will miss this game as well, which was expected. Redshirt sophomore outside linebacker Mike Jones — a roving play-maker for Brent Venables — will also sit. So, too, will defensive lineman Tyler Davis, who has battled injuries all season. Davis has played only 59 snaps across three games this season, so far. As a freshman in 2019, Davis recorded 10 tackles for loss. A great deal of hype surrounded Davis entering this season.

So to recap what Clemson's D is staring down this week against ND:
No LB James Skalski (groin). No LB Mike Jones Jr. (was day to day last week). No Tyler Davis (injured Oct. 21 practice). No Xavier Thomas in the first half (targeting call from last week).

Skalski has 20 tackles on the season, which ranks 7th on Clemson’s roster, including 1.5 for loss. During the 2019 season, Skalski finished second on the roster with 105 tackles (7.5 for loss). Skalski also recorded 4.5 sacks.

Jones has been a bit of a breakout player for Clemson’s defense in 2020, emerging as a versatile piece for the Tigers. Jones has 15 tackles (2.5 for loss), one forced fumble and one interception, which came two Saturdays ago against Syracuse.

This is a lot of power missing up the middle defensively and in the front seven for Clemson; that’s something Notre Dame can capitalize on. Led by Kyren Williams, Notre Dame’s rushing attack averages 5.1 yards per game and 231 yards per game, second in the ACC. The Irish also rank 25th nationally in points per play.

After opening has a 5-point favorite over Notre Dame, Clemson has held steady — despite the injuries and missing pieces on the road. Clemson remains a 6-point favorite, per DraftKings.