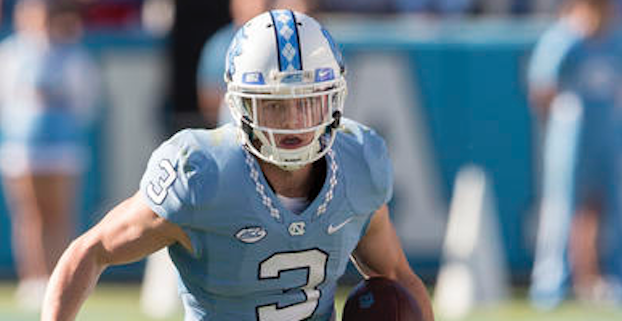 When North Carolina and Duke kick off their Thursday night matchup, the Victory Bell for which they’ll be battling will have a new look. If Tar Heel receiver Ryan Switzer has any say, it won’t stay that way.

UNC athletic director Bubba Cunningham and Duke AD Kevin White agreed prior to this year’s contest to have the bell — which traditionally has been painted in the colors of the winning team — feature a half-and-half design:

Word is respective ADs at Carolina and Duke agreed this is the new look for The Victory Bell. pic.twitter.com/OQbaUjWrNq

Switzer said in an interview with The David Glenn Show that, no matter who wins Thursday, the winner will be looking to wipe away the colors and logo of the loser.

“I’ll have my own can of spray paint, so they’re going to have to either take that from me, or it’s getting painted either way,” Switzer said. “I’m sure they’re planning the same thing, so it’s definitely not going to stay half-and-half the way it is, regardless of the outcome of the game.”

UNC has taken the Victory Bell home after 23 of the last 26 meetings. When the Tar Heels reclaimed the bell two years ago, they damaged the Blue Devils’ locker while painting it, resulting in Cunningham and head coach Larry Fedora paying Duke roughly $27,000.

During the conversation, Switzer also talked about the Duke-UNC basketball rivalry and where he ranks Mitch Trubisky among college quarterbacks. Click below to hear the full interview: