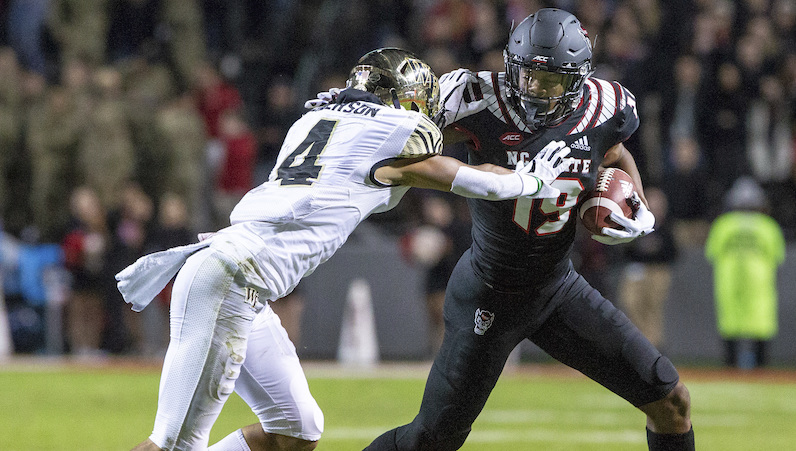 As The Wolfpacker notes, a couple potential key updates have come regarding veteran offensive talents CJ Riley and Dylan Autenrieth. Both players have been granted a sixth year of eligibility; this will allow Riley and Autenrieth to compete for NC State in 2020 and 2021, if they so choose.

Riley, a 6-foot-4 receiver and one of the fastest players on NC State’s roster, tore his ACL in the 2019 opener against East Carolina. Two weeks later, at West Virginia, Autenrieth was also injured; he missed the ensuring nine games. Now, Riley and Autenrieth each have two years of eligibility remaining; the 2019 campaign was technically supposed to be the redshirt junior season for both players.

Per their https://t.co/3nE3eCixLV profile pages, both fifth-year seniors tight end Dylan Autenrieth and receiver C.J. Riley have been granted a sixth year of eligibility, thus they have two more seasons remaining, if they choose.

During the 2018 season, Riley was an important part of NC State’s deep receiving corp: 48 targets and 28 receptions (58.3 percent catch rate) — for 315 yards and and two touchdowns.

Prior to his freshman season, Riley tore an ACL in 2016, too. Riley has 37 career receptions with the Wolfpack.

Autenrieth has only two career receptions; however, he’s still a vital piece of NC State’s offense. The Wolfpack utilize Autenrieth in their run game; the 6-foot-4, 240-pound tight end is one of the best blockers in the program. When Autenrieth left NC State’s active lineup, the ground performance slumped.

According to Inside Pack Sports, there’s a third player to receiver an extra year of eligibility: offensive lineman Tyrone Riley.

Riley has played all over the field for NC State while in Raleigh — starting at defensive line, then moving to offense, while also participating in special teams.

During fall camp 2019, Riley suffered an injury and missed the entire season. At the time, he was competing for the starting left tackle position. Riley applied for a waiver for a sixth season of eligibility, which he received for the 2020 season. Once again, the 6-foot-6, 296-pound lineman will compete for a starting job.