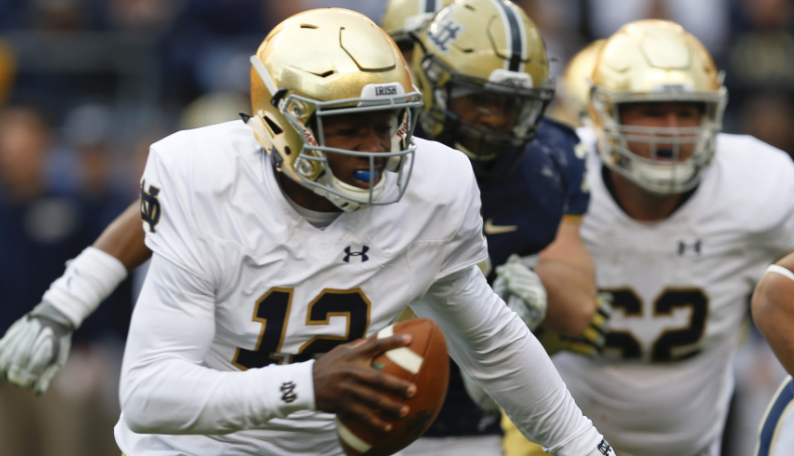 Notre Dame is speeding things up in 2017 with the addition of Chip Long.

Long, a 34 year-old who has spent time at Illinois, Arizona State, and most recently Memphis, has just one year of offensive coordinator experience under his belt. But he’s gaining a reputation for explosive offenses that showcase talent.

Last season, serving as offensive coordinator at Memphis, Long relied on Tigers wide receiver Anthony Miller. Miller went on to haul in  95 catches (on 134 targets, per Football Study Hall) for 1,434 yards and 14 touchdowns.

Irish fans can only hope Long can work similar magic with Equanimeous St. Brown this fall. Brown showed his potential last fall with 58 catches for 961 yards; he heads into training camp as Notre Dame’s top receiver.

Long is a former tight end at North Alabama, who served as a tight ends coach for six seasons at Illinois and Arizona State from 2010 to 2015 prior to his season as offensive coordinator at Memphis. This is good news for Notre Dame’s collection of tight ends, including seniors Nic Weishar and Durham Smith, as well as incoming freshman Brock Wright.

Despite being overshadowed by Anthony Miller, Memphis tight end Daniel Montiel had 27 catches for 338 yards and three touchdowns last fall. So the opportunities for the Irish tight ends to get involved will present themselves as well.

Notre Dame will also dedicate more attention to getting the ball in the hands of its running backs in the passing game.

Last season at Memphis, the Tigers had two running backs, Darrell Henderson and Tony Pollard, with at least 20 catches each. Pollard led the way with 29 receptions for 298 yards, while Henderson added 20 catches for 237 yards. Both averaged over 10 yards per catch, and combined for five touchdowns.

Interestingly enough, neither Henderson nor Pollard were among the Tigers’ top two rushers. This indicates that Notre Dame may also try to spread the ball around to more people.

With such a fast offense, however, the flip side is that the defense is often on the field more.

Notre Dame’s offense will be quicker and more versatile under Chip Long. But how the difference in tempo affects the Fighting Irish defense will go hand-in-hand with the team’s success in 2017.