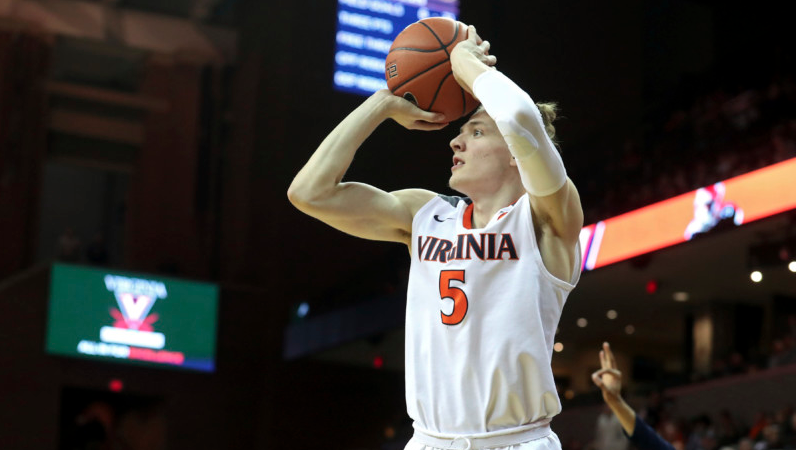 Kyle Guy will play a bigger role for Virginia basketball during the 2017-18 season. (AP Photo)

Last weekend, Virginia received a commitment from a sleeper of a frontcourt prospect in Francesco Badocchi. The good luck wore off by Wednesday, though, as St. John’s transfer Malik Ellison picked Pitt over UVA.

So, barring any surprises, Tony Bennett and the Cavaliers are probably done adding to the 2017-18 roster. The pickups of Badocchi and Rutgers graduate transfer Nigel Johnson give Bennett and his staff more to work with in the coming season after losing London Perrantes to graduation and Jarred Reuter, Darius Thompson and Marial Shayok to transfer.

Cavs fans have to consider it a fairly successful spring recruiting period. Early last month, Virginia’s roster faced a few questions. Since then, it took steps to address the two biggest needs: a scoring wing and another body in the post.

Of the two newer additions, Johnson holds a higher profile and has the best chance to make an immediate impact. Ty Jerome will likely slide into Perrantes’ starting point guard spot, but Thompson and Shayok’s decisions to transfer left the Cavaliers without two of their most prominent perimeter scorers from last season.

There’s hope around the program that former McDonald’s All-American Kyle Guy will develop more consistency as a sophomore. The Wahoos also have high hoopes for redshirt freshman DeAndre Hunter.

But Johnson is the one who brings similar qualities to Thompson and Shayok; he’s a veteran with the ability to score in bunches. The 6-1 guard who began his career at Kansas State before moving on to Rutgers also has a knack for stepping up in the biggest games.

With Johnson on board, the Cavs shouldn’t have to rely as heavily on the streaky-shooting Guy to spark the offense. In addition, Hunter should have more time to develop and acclimate to play at the ACC level.

How much Badocchi can contribute as a freshman is more of a mystery. He comes in as the No. 276 player in his class, according to 247Sports’ composite rankings. Typically that kind of rating means a player is a long shot to really succeed in the ACC. However, Badocchi has been tough to evaluate because he skipped AAU play last summer to return to his native Italy.

Bennett hasn’t been hesitant to redshirt a young big man if he thinks it’s best for his development. Jack Salt and Mamadi Diakite each sat out their first years on campus, and Jay Huff followed suit last season.

With Salt, Diakite, Huff and Isaiah Wilkins all on board for next season, it certainly seems like a distinct possibility Badocchi could redshirt next winter.

But the addition of another young post player solidifies the roster. His presence would be particularly important in the event of an injury or unexpected loss, such as Austin Nichols’ dismissal last season.

All in all, the Cavaliers managed to address a couple of needs. They should feel reasonably comfortable with their personnel heading into next year.