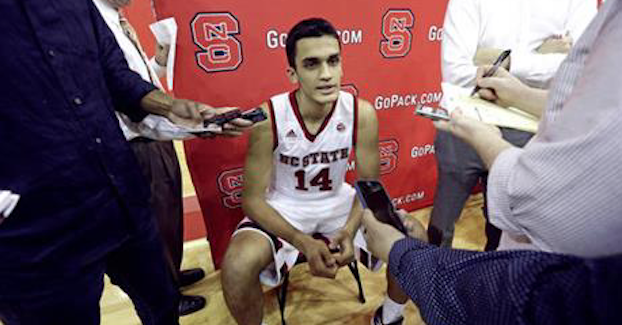 News broke early Monday afternoon that NC State’s prized freshman post player Omer Yurtseven will be suspended for the first nine games of the season for the Wolfpack. The story was first reported by Evan Daniels of Scout.com.

The center from Turkey will also be required to make a repayment of $1,000 to a charity of his choice.

Yurtseven’s eligibility issues stemmed from his time playing on a professional basketball team in Turkey. His amateur status was impacted as a result, leading to the suspension.

This falls in line with the timeline Mark Gottfried presented at ACC Operation Basketball last week in Charlotte. NCSU’s head coach told the assembled media that he and his staff expected a ruling sometime in the next week.

NC State freshman Omer Yurtseven is expected to get hit with a 7-9 game suspension, per a source. Expect an official announcement soon.

This is good and bad news for the Pack, but at the least, it provides the team with some much-needed clarity. The good: NC State now knows that Yurtseven, a former 5-star recruit, will be eligible this season.

Enes Kanter, now with the Oklahoma City Thunder, missed the entire 2010-11 season while serving a suspension for accepting money from a club team in Turkey — Fenerbahce. This is the same club team that Yurtseven played for the last three years.

The bad: The Pack will be without one of its most talented players for a key nonconference stretch, including the Paradise Jam in the Virgin Islands. The team is set to play Montana, one of Creighton or Washington State and another game, too — the opponent of which is to be determined. Yurtseven will also not be back in time for NC State’s ACC/Big Ten challenge matchup at Illinois on Nov. 29.

That’s not the most daunting of schedules, but obviously the Pack would like to have its full roster at its disposal. If Yurtseven serves the full nine games, he would return in the middle of December — right around the time of exams.

NC State’s 10th game of the season will come at home when it faces Appalachian State on Dec. 15 at PNC Arena.

The seven-foot Yurtseven committed and signed with NC State on May 16.

There’s still no word on the eligibility status of another one of NC State’s freshman — Ted Kapita. A native of Congo, Kapita is still ineligible while waiting for clearance from the NCAA. His possible involvement with professional leagues could jeopardize his eligibility.

Gottfried stated in Charlotte that Kapita’s status was less clear than that of Yurtseven.