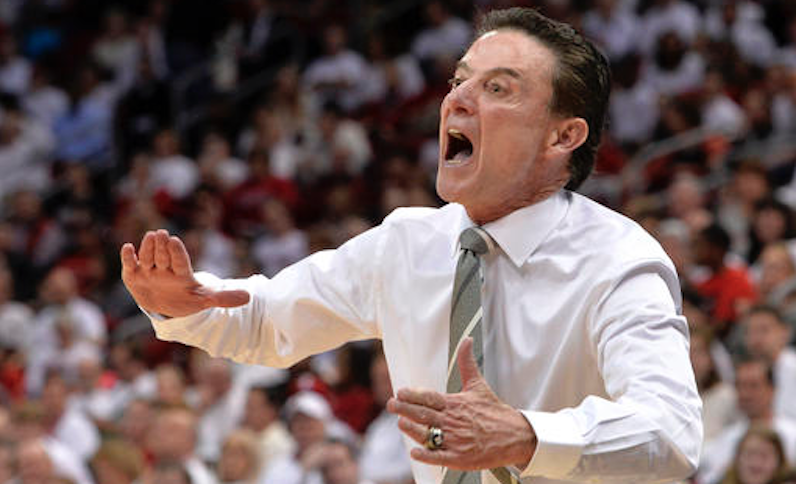 Louisville basketball coach Rick Pitino (AP Photo)
Despite a humbling 71-55 loss to Virginia in Charlottesville Monday evening, Louisville remains in a strong position, sitting at 7-4 in ACC play, and 19-5 overall. Rick Pitino’s Cardinals are geared up for a return to the postseason, where they look to make some noise after sitting out last season’s ACC and NCAA Tournaments as a self-imposed penalty.
Louisville is one of the stronger defensive clubs in the ACC, which portends well for its postseason hopes. The Cards are second in the league, behind only Virginia, in scoring defense, allowing just 62.7 points an outing. U of L is leading the league in field goal percentage defense, allowing opponents to shoot just 38.4 percent from the floor.
The Cards are also tough on the boards, ranking second in the ACC, behind only national leader North Carolina, with an average of 40.2 rebounds an outing. They’re a well-rounded group, ranking second in the ACC in offensive rebounds (13.5 per game), and third in defensive boards (26.8 per game).
In addition, Louisville leads the league in turnover margin (+3.67), and only Georgia Tech has blocked more shots than the Cardinals among ACC rivals.
Mixed together, the numbers paint the picture of a U of L squad that plays stiff defense, forces a high number of low-percentage shots, and often allows just one shot with the way they rebound.
Combined with a sound offense that rarely beats itself and gets plenty of second-chance opportunities, and the Cardinals are one of an elite group of a dozen or so clubs around the country who can beat anybody they face on any given day.
Louisville sits two games behind North Carolina in the loss column in the ACC standings. But the Cards are traveling to Chapel Hill on Wednesday, Feb. 22. U of L desperately needs to win that particular game to have any realistic hope of claiming the ACC regular season crown.
Beyond that, if the Cards get hot from the perimeter and stay healthy, an ACC Tournament title and a run to the Final Four isn’t out of the question.
The Cards are deep, with ten players averaging 11 or more minutes a game. They’re a balanced squad offensively, with only one player, Donovan Mitchell, averaging more than 12.1 points a game — Mitchell averages a team-high 15 points an outing. Seven other Cardinals average between 12.1 and 5.8 points an outing.
From a ceiling standpoint, Louisville’s is a high one. Anyone, of course, can have a bad day in March and find their season suddenly over. But U of L’s defensive and rebounding prowess are two assets that should have Cardinal fans dreaming of even more postseason glory this spring.