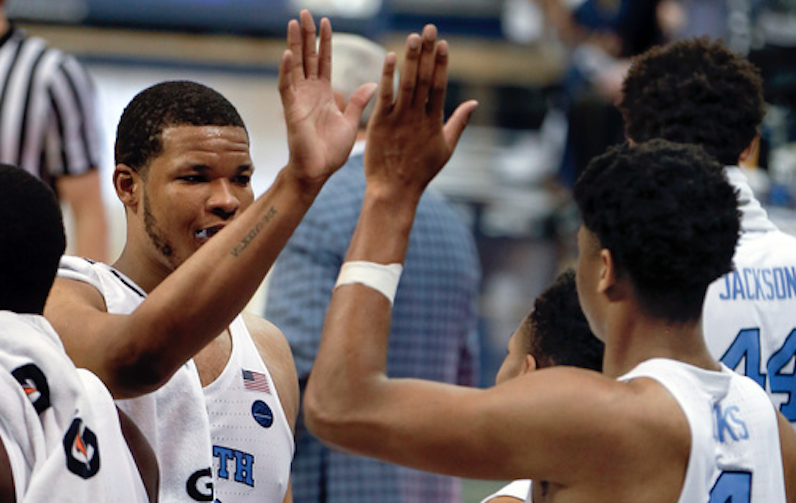 Kennedy Meeks (left) and Isaiah Hicks (right) will play in the Dean E. Smith Center for the last time on Saturday. (AP Photo)

UNC will celebrate Senior Night on Saturday as the Tar Heels try to secure the outright ACC regular-season title. The opponent? The archival Duke Blue Devils.

It’s been an up-and-down ride at North Carolina for Kennedy Meeks, Isaiah Hicks and Nate Britt, the lynchpins of UNC’s 2013 signing class. Over four seasons, UNC’s core trio from that class has produced a 108-35 record (75.5%).

UNC’s senior class also includes Stilman White, who signed with UNC in 2011 but spent two years on a Mormon mission. A fifth scholarship senior, Kanler Coker, joined the basketball team after three years as a quarterback on UNC’s football team.

Not bad for a group that was one of the first waves in a downslide in North Carolina’s basketball recruiting.

From 2005-11, North Carolina’s recruiting classes ranked in the top six of 247Sports’ composite rankings in five out of seven cycles. That included a No. 1 ranking in 2006.

But the 2013 class, which ranked No. 18 overall nationally, was the second in an ongoing streak of five straight classes in which UNC failed to sign a group ranked above No. 10 nationally. The 2013 class featured Meeks, Hicks and Britt.

Recent years have seen even further slips for the Tar Heels. UNC’s 2015 class — consisting of Kenny Williams and Luke Maye — ranked No. 67 nationally. UNC now sits at No. 30 in the 2017 rankings.

Meeks and Hicks are two of the biggest reasons why UNC leads the ACC, and the nation, in rebounding. Meeks, in particular, averages 9.1 boards per contest.

Britt hasn’t been as steady a performer as Meeks and Hicks, but he’s been reliable at both guard spots. Although White has played sparingly as a senior, his UNC legacy will be tied largely to his freshman year and the 2012 NCAA Tournament. That was when White was thrust into a starting role following a wrist injury to starting point guard Kendall Marshall. White nearly helped the Tar Heels reach another Final Four.

In hindsight, these UNC seniors have much more to play for in the coming weeks than most prognosticators could have anticipated four years ago.