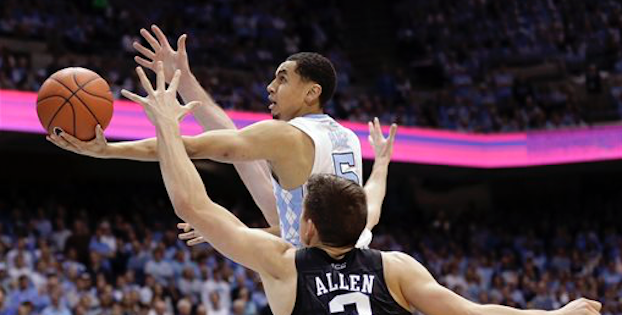 Marcus Paige spent the overwhelming majority of his minutes at shooting guard this season. (AP Photo)

Our “From the Inbox” series includes emails and submissions from our readers that present unique ideas and interesting takes on ACC-related topics. With North Carolina and Duke tipping off in Cameron Indoor Stadium on Saturday, we share an email from Jim in Lillington, North Carolina, who believes it’s time for UNC senior Marcus Paige to be moved back to point guard. Take it away, Jim.

One of my favorite characters in history is Julius Caesar. I have enjoyed a number of historical fiction biographies of him. Conn Iggulden wrote a four-book series that is engaging and a great “in the action” tale. I am now reading Colleen McCullough’s series of VERY long books, which have greater historical detail and more exploration of politics and culture. Regardless of who you read, his leadership, vision and execution were undeniable.

I seem to remember that for his first three years, Marcus Paige was the Tar Heels’ floor general, and it was in that role that he grew into the All-American guard.

Do I remember that wrong? If not, I respectfully submit (1) It is not too late in the Tar Heels’ season to “put him back where he belongs,” and (2) Not only is he being wasted as a “shooting guard” (as opposed to being the ball-handling point guard), but his talent and potential are being eroded.

I wish Roy Williams would just let Paige be the Tar Heels’ Caesar and put the ball back in his hands. I am sure you saw the story in the last week or so about Kentucky’s Tyler Ulis running their offense against South Carolina when Calipari was ejected less than three minutes into the game. During timeouts, the assistant coach didn’t even try to talk about running the offense and what plays to run. He just let Ulis run the show, trusted him and got a masterpiece.

Marcus is intelligent. Give back to him his domain.

Want to send us your thoughts? Fire away!