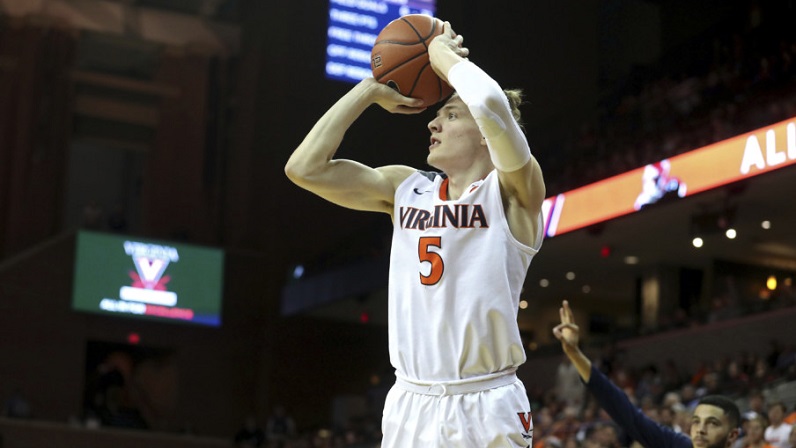 Heading into the 2017-18 season, there’s more uncertainty about Virginia basketball than any time the past few years. It’s an uneasiness that could go away quickly when the season begins if Kyle Guy emerges as a go-to player for the Cavaliers.

Guy garnered plenty of attention in his first season at UVA. He became just the third McDonald’s All-American to sign with the program in 20 years and his infamous (and now gone) man bun was not the style choice of a young man who shied away from the attention.

But in many ways, the attention was out of proportion to Guy’s 7.5 point per game production. There were certainly games where the Indianapolis product looked every bit like a star in the making, but too often followed by a night when he could hit next to nothing.

But it certainly seems the talent is there and the door is open for someone to step into a starring role for the Cavaliers, who don’t return a double-digit scorer from last season’s team that was blown off the court by Florida in the NCAA Tournament Round of 32.

So what will it take for Guy to become an All-ACC caliber player? Optimistically, a year on campus working with Virginia’s strength and conditioning coaches will have worked wonders for a player who came into college rail thin and weighing just around 160 pounds. Playing against stronger and more physically mature players took its toll on Guy as a freshman.

Some of Guy’s worst games, and biggest dips in performance, came in the second contest of a back-to-back or two-games-in-three-days scenarios. He made four 3-pointers and had 14 points at Syracuse on a Saturday, then scored just two points Monday against Louisville. He scored 20 points against Pitt in the ACC Tournament, then was held scoreless by Notre Dame the next night.

Guy did score 19 and 17 over the course of three days in back-to-back victories against N.C. State and North Carolina in February. But after playing at least 32 minutes in both games he still looked a bit gassed a week later.

But Virginia coach Tony Bennett may ask Guy to produce those kinds of minutes and points on a regular basis. Guy played just 18 minutes a game as a freshman, but somebody will have to make up the difference after the graduation of London Perrantes and his 32 minutes per game.

Neither Majestic Mapp nor Sylven Landesberg, the previous two McDonald’s All-Americans for UVa, panned out. Mapp because of injuries, Landesberg academics. Guy has an opportunity to reverse that course, if he can develop consistency as a sophomore.