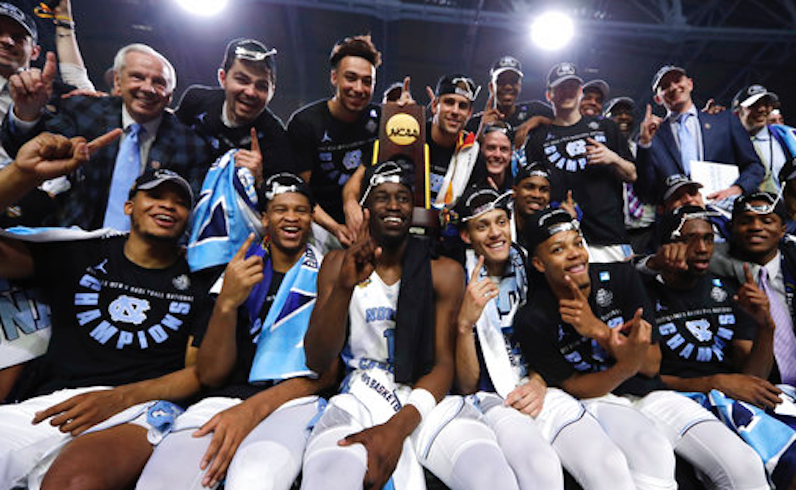 North Carolina displayed all three in the last 40 minutes of its journey to a sixth NCAA Tournament title. There was a lot of the latter two, but also enough of the first to bring college basketball’s crown back to the ACC.

The Tar Heels’ 71-65 victory over Gonzaga on Monday night won’t be remembered as the most beautiful game ever played. But as UNC hangs another banner, its last victory of the 2016-17 season will be one that’s talked about in Chapel Hill forever.

For the second year in a row, the team’s season came down to the final minute on the biggest stage. Only this time it wouldn’t be denied.

The Tar Heels held a 66-65 lead going into the final minute and extended it to a three-point deficit after an Isaiah Hicks bucket with 26 seconds left. On Gonzaga’s next possession, Kennedy Meeks blocked Nigel Williams-Goss’ jumper before Joel Berry snagged the loose ball and pushed it ahead to Justin Jackson for the exclamation point.

As the UNC faithful erupted in University of Phoenix Stadium, so too did those cheering on the Heels from the Dean E. Smith Center to Top of the Hill to He’s Not Here. A sea of blue flooded Franklin Street soon after as Carolina fans celebrated the school’s first basketball title since 2009.

Like last year, Roy Williams’ squad wrapped up its season with a 33-7 mark. This time, the ending was sweeter for the Tar Heels.

Williams now has three national championships to his name, becoming the sixth coach in the history of the game to accomplish that feat. Berry, who was named the Final Four’s Most Outstanding Player, will see his jersey honored in the Smith Center rafters. The program also became the first in the ACC to notch six NCAA championships in men’s basketball.

For the conference, it was the desired finish to an otherwise forgettable NCAA Tournament. The ACC enjoyed a spectacular regular season and even landed a league-record nine teams in the Big Dance. After a disastrous first weekend, however, the only squad the conference put in the Sweet 16 happened to be the one that would go all the way.

With Clemson winning the College Football Playoff National Championship in January, this marks the first time since 1990-91 (Georgia Tech, Duke) that the ACC has swept football and basketball national titles in the same academic year. The only other time it happened? Well, that was in 1981-82, which also produced a gridiron championship for the Tigers and a hardwood title for the Tar Heels.

As for this basketball season, North Carolina will have seven months to enjoy its latest triumph before it’s time to turn the page and start a new chapter.

Will more history be made in the ACC next season?