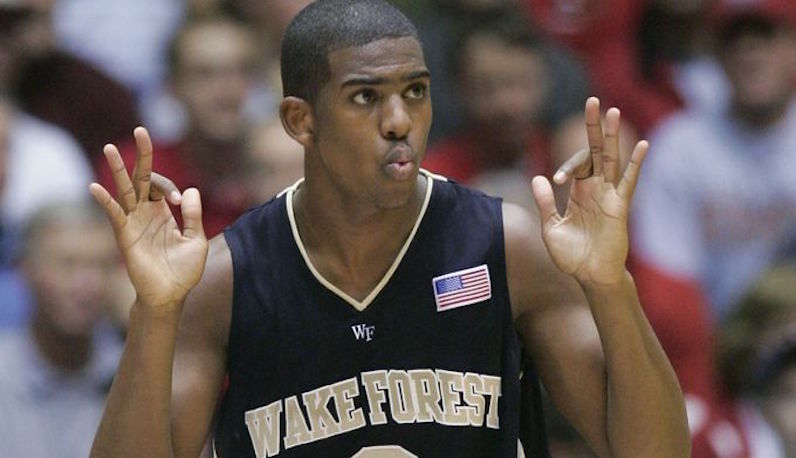 When Chris Paul spoke on the Wake Forest campus this week, he mentioned a story that brought up an interesting “what if” for the basketball program.

Paul described a recent dinner with an unnamed Houston Rockets teammate, along with Trevor Ariza and all three players’ wives. Paul said that the topic of Wake Forest’s academics came up, and the unnamed teammate reminded Paul that they were supposed to go to Wake Forest together, but that he couldn’t get in while Paul did.

That unnamed teammate has to be P.J. Tucker, an NBA veteran who just landed with the Rockets in the offseason — via the mid-level exception.

Tucker is a North Carolina product, going to Enloe High School in Raleigh, and who was part of the same college class of 2003 as Paul. In fact, Scout ranked them as the No. 1 and No. 5 players in the state of North Carolina.

Paul, who is from Winston-Salem, and Tucker certainly knew each other, if nothing else from the AAU basketball circuit. Paul’s Kappa Magic defeated Tucker’s N.C. Red Storm for the 2001 state AAU championship.

Skip Prosser had just taken over as the Wake Forest coach in 2001, going 21-13 and 25-6 in his first two seasons after arriving from Xavier. Although Josh Howard was graduating, Prosser had built a strong young core for the 2003-2004 season. The junior class was Jamaal Levy, Vytas Danelius and Taron Downey, and the sophomores were Justin Gray, Eric Williams and Trent Strickland.

Chris Paul would go on to play two seasons, and Visser had a fine career, including an All-ACC selection in 2007. But Hendley and Ingram transferred after their freshman seasons — Hendley to UNC-Wilmington and Ingram to East Carolina.

While the Deacons went 48-16 in Paul’s two seasons, they never made a dent in the postseason, losing in the first round of the ACC Tournament both years and never moving beyond the third round of the NCAAs.

However, what if Prosser had been able to add Tucker instead of Hendley, for example?

Football sans pads: Not so much

One of the main issues with the Deacons during the Paul era was rebounding and physical play. After Danelius’ sophomore season in 2002-2003, Prosser could never get him to rebound and bang like a power forward. Danelius averaged 4.5 rebounds a game over his final two seasons.

That left Eric Williams, with Visser behind him, as the only real inside presence. Jamaal Levy — all 6-9, 186 pounds of him — was able to provide rebounding from the wing, but he couldn’t play the physical defense the Deacons needed.

That’s exactly where Tucker would have helped. Although Tucker is only 6-6, he’s built like a brick and became a rebounding machine.

Tucker ended up at Texas, where he averaged 10.4 points and 6.8 rebounds as a freshman and 13.7 points and eight rebounds as a sophomore. He’s been known all his career as an excellent defender.

The two actually played one another in college, too. Back in 2004, Wake won an 89-88 thriller over Texas in Winston-Salem. Fittingly enough, Paul scored 23 points and handed out 12 assists; Tucker led a Texas team that featured LaMarcus Aldridge and Booby Gibson with 27 points.

Tucker’s presence also would have helped tremendously after Chris Paul left. The Deacons fell off to 17-17 in the 2005-2006 season, but as a junior, Tucker led the Longhorns to a 30-7 mark and the Elite Eight in the NCAAs. He was named the Big 12 player of the year and was a second-team All-America selection before declaring for the NBA Draft.

Would Tucker’s talents have taken Prosser’s squads further in the postseason? Well, not if he couldn’t have stayed on the court. As if in confirmation that Wake Forest made the correct decision on his admission, Tucker was declared academically ineligible for the second half of his sophomore season at Texas.

Still, it’s interesting to think about what would have happened if Chris Paul and P.J. Tucker, two N.C. products, had been able to play together in college.

Wake Forest football — the good and bad at 2-0