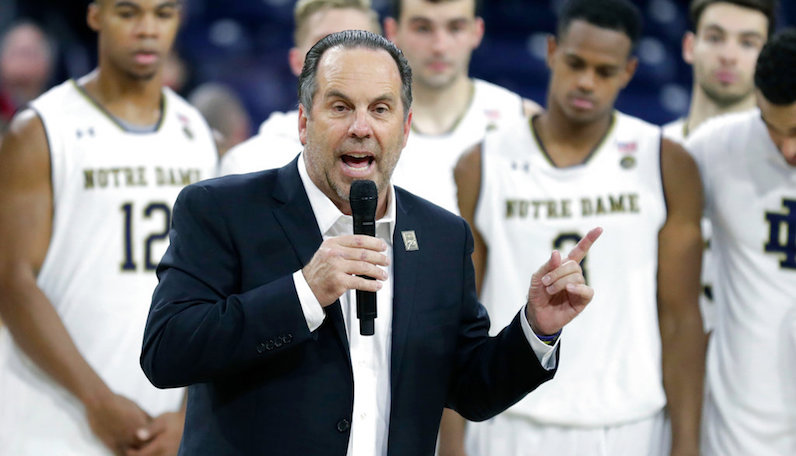 Notre Dame completed its comeback win, 80-77, over Wake Forest in dramatic fashion to close down Day 1 of the 2021 ACC Tournament. Tied at 77, as the clock expired inside the Greensboro Coliseum, guard Trey Wertz let a deep 3-pointer fly. Despite a desperate contest from Isaiah Mucius, Wertz drilled the shot, which gave Notre Dame a walk-off victory.

Wake Forest jumped out to a 21-7 lead over Notre Dame to start the game. At various points, Notre Dame cut into the margin, but for the most part, Wake Forest controlled the action.

With 7:19 left to play in the game, Davien Williamson splashed a jumper to give Wake Forest a commanding 12-point lead. However, it was all Notre Dame after that.

The Irish ripped off a 12-0 run and tied the game at 75, thanks to a pull-up 3-ball from All-ACC point guard Prentiss Hubb. On the next possession, Hubb was fouled and made both free throws — giving Notre Dame a 77-75 lead.

Freshman guard Carter Whitt drained a pull-up 2-pointer, which tied the game up at 77 with 50 seconds remaining. On the ensuring Notre Dame possession, Nikola Djogo missed a 3-point look, which set the stage for a bizarre finish.

With the shot clock turned of Wake Forest played for the final show. Williamson went to work with about 10 seconds left — isolated against Cormac Ryan.

Ryan, however, blocked Williamson and maintained possession of the ball. The Stanford transfer pushed it up the floor and then passed off to Wertz for a game-winning missile.

Notre Dame advances to play North Carolina on Wednesday in the second round of the ACC Tournament.