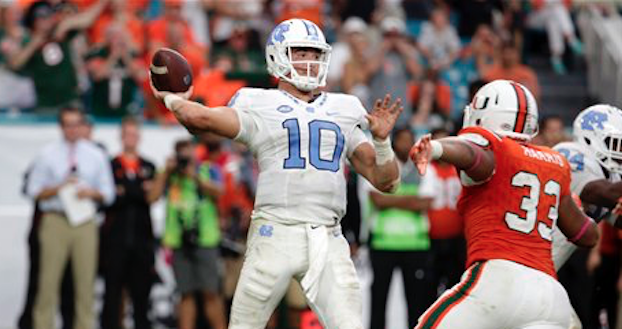 Mitch Trubisky is leading the ACC in completion percentage this season. (AP Photo)

North Carolina quarterback Mitch Trubisky is making the most of his first year as the Tar Heels’ starter.

If he continues to play at his current level, it might be his only year as the team’s starter.

Trubisky’s on-field performance this fall has led to a rapid ascension up a few NFL Draft boards. Through eight weeks of the season, the junior is now in the first-round conversation for the 2017 draft.

CBS Sports lists Trubisky as its top quarterback and No. 7 overall prospect on the board. A recent mock draft by the same website projected the 6-3, 220-pounder to go No. 4 overall to the Chicago Bears.

Following UNC’s Oct. 15 win at Miami, SportingNews.com was more cautious in its assessment but still noted that Trubisky would garner interest from franchises should he depart for the NFL.

The Mentor, Ohio, native isn’t the only ACC quarterback on the NFL Draft radar. Clemson’s Deshaun Watson (No. 13) and Miami’s Brad Kaaya (No. 46) are also top-50 prospects in CBS Sports’ rankings.

More on UNC: How will the Tar Heels replace Trubisky if he declares for the NFL Draft?