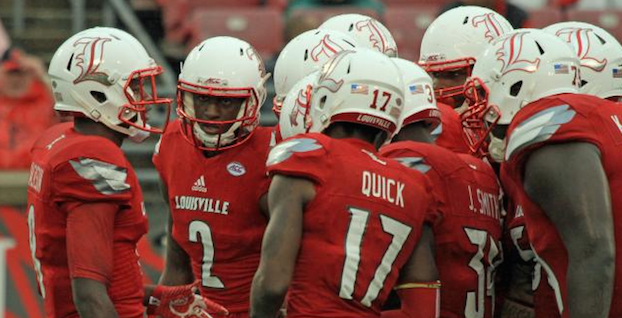 Deshaun Watson tops the list of college football’s best mobile quarterbacks. Beyond Watson, though, one of the better dual-threat signal callers is another ACC denizen: Louisville’s Lamar Jackson. There’s a lot of excitement surrounding Jackson, who started eight games as a true freshman in 2015, coming into his sophomore campaign. One of the reasons pundits and fans alike are so high on Jackson is the pass-catching duo he has on the perimeter: seniors James Quick and Jamari Staples. The two receivers took much different paths to this point of their careers — Quick a top 100 recruit, Staples a refugee of the UAB program — but their production lines up.

The Cardinals haven’t produced a 1,000 yard receiver since Harry Douglas back in 2007. As these two wideouts enter their senior seasons, can they change that? They each have one more trip around the ACC to show NFL scouts what they’re capable of. If Louisville is to challenge Clemson and Florida State — and jump up into the league’s top tier — they’ll need elite playmaking from their receivers. Both Quick and Staples ranked inside the top 10 in the ACC last season in receiving yards per game. They’re big play threats, too: of ACC players that had at least two receptions per game in 2015, Staples and Quick ranked fourth and seventh, respectively, in yards per catch.

Want to see where you school’s top receiver ranked? To find out for free, sign up for basic access to ACCSports.com.