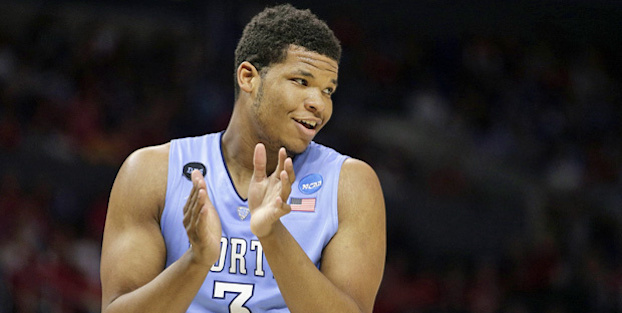 North Carolina forward Kennedy Meeks (3) reacts during the first half of a college basketball regional semifinal against Wisconsin in the NCAA Tournament, Thursday, March 26, 2015, in Los Angeles. (AP Photo).

North Carolina came almost as close as you possibly could to winning a national championship a season ago. They of course lost in heartbreaking fashion when Villanova’s Kris Jenkins splashed a jumper as the buzzer sounded. As that shot flew through the air, here’s the five-man group UNC had on the floor: Marcus Paige, Joel Berry, Brice Johnson, Justin Jackson and Isaiah Hicks. Two of those guys — Paige and Johnson — are gone, playing basketball professionally nowadays.

On the bench during that final play was one of North Carolina’s most experienced players — Kennedy Meeks. It’s been an interesting three years for Meeks in Chapel Hill; by a lot of metrics, he’s had a very productive career, and the team has experienced great amounts of success while Meeks has been an integral part of their roster: 83 wins, an ACC Championship and a Final Four appearance. He’s played in 104 games (79.8 win percentage) and made 77 starts. During the first week of the 2016-17 season, he’ll eclipse the 1,000 career points benchmark.

However, Meeks missed seven games last season, due to a bone bruise in his left knee, and played just 20.6 minutes per game. It’s tough to knock Meeks for playing fewer minutes; he was recovering from an injury that cost him 20 percent of the season, and his backup — Hicks — is an incredibly good player. Now as a senior, though, the big fella from Charlotte — a former four-star recruit — will need to live up to his billing, and play at an All-ACC level if the Tar Heels are going to make another run at the Final Four.

To read more on Kennedy Meeks and his senior season projections, sign up for basic access to ACCSports.com.