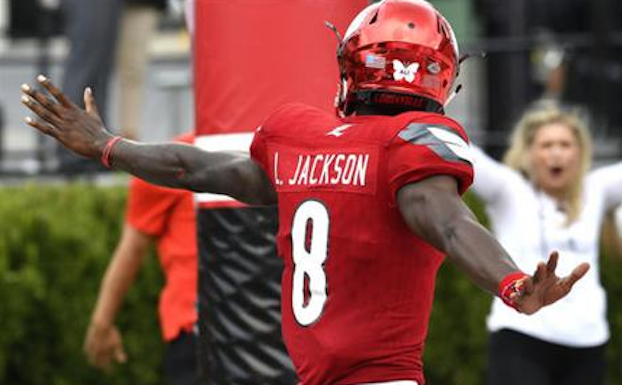 The Louisville Cardinals had a national stage on Saturday afternoon in the Commonwealth of Kentucky, and they made sure not to disappoint. After racking up video game numbers against Charlotte and Syracuse, Louisville had the No. 1 offense in the nation, by a variety of metrics. Things were sure to get more challenging at home against then No. 2 Florida State, right? They had to. Surely they must.

Well, no, actually they didn’t. With the eyes of the college football nation fixed on them, Louisville’s red-clad army ripped off one of the most impressive displays of offense in the history of the ACC, demolishing the Seminoles by 43 points. The Cards, of course, were led once again by quarterback Lamar Jackson, who continues to torment opponents through the air and on the ground.

Jackson’s passing ability has been on display early in 2016; he’s completed 61 percent of his tosses (50-of-82) and his eight touchdowns rank second in the ACC behind only Virginia Tech’s Jerod Evans. Jackson also leads the conference in QB rating, too, according to cfbstats.com. We can all agree that the sophomore quarterback is a dangerous threat passing the ball to a host a talented perimeter players. However, it’s his running game that’s made him, through three weeks, the best player in not only the ACC, but also the country.

To read more on the omnipotent rushing attack of Lamar Jackson and Louisville, sign up for basic access to ACCSports.com.