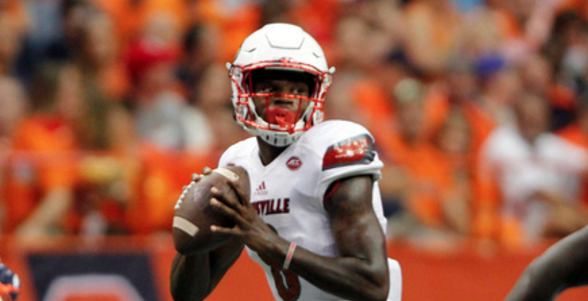 Lamar Jackson leads the ACC in a variety of statistics early on in 2016. (AP Photo).

If you opened up Twitter on your phone, tablet or computer at some point in time Friday night, there’s a strong chance you once again saw the name Lamar Jackson omnipresent in your timeline. Louisville’s star quarterback took flight in his team’s second game of the season — a road contest against Syracuse — and he wasted little time getting in on the action. Within the first 11 minutes of the game, Jackson scored four times, including a 72-yard hook-up with receiver James Quick on a beautiful deep ball and a 72-yard run of his own.

Lightning would strike once more, as Jackson would add another rushing touchdown — his fourth of the game — in the second quarter: a zone-read keeper that included Jackson hurdling a defender on his way in from nine yards out. The Cards won big, defeating Syracuse 62-28. They’re now 2-0, and through 120 minutes of football, Louisville has outscored their opponents by an absurd 90 points. Syracuse and Charlotte, who Louisville crushed 70-14 on opening night, won’t ever be confused for the 1985 Chicago Bears on defense, but Jackson’s splendid performances — mixed with his considerable preseason buzz — have made him an instant Heisman Trophy candidate.

Let’s take a slightly deeper dive into his numbers, shall we?

To read more on the unbelievable performance on Lamar Jackson, sign up for free basic access to ACCSports.com.