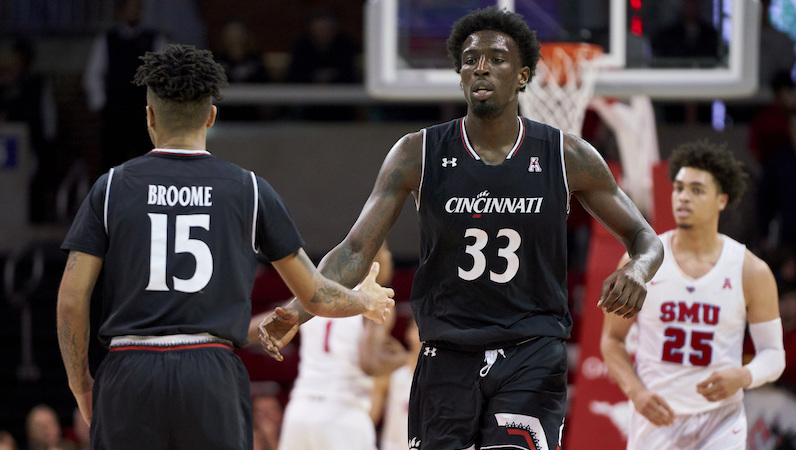 Cincinnati center Nysier Brooks (33) celebrates with teammate Cane Broome (15) after a made basket against SMU during the second half of an NCAA college basketball game at Moody Coliseum, Wednesday, Feb. 27, 2019, in Dallas. (AP Photo/Cooper Neill)

Busy day, lots to get to — starting with major transfer news in college hoops.

On Tuesday, Miami Basketball landed a commitment from one of the top available transfers: Cincinnati big man Nysier Brooks.

The 6-foot-11 Brooks played for three years at Cincinnati; as a junior in the 2018-19 season, Brooks became a starter and emerged as an excellent defensive frontcourt player. Brooks blocked 1.5 shots per game — or 2.5 per 40 minutes. In AAC play, Brooks posted a monster block rate of 10.4 percent.

Sources: Cincinnati transfer Nysier Brooks is expected to commit to Miami. Official announcement should come at some point today. Averaged 8.1 PPG and 6.3 RPG.

Offensively, Brooks is a terror on the glass (13.6 percent offensive rebound rate) and a productive paint scorer. Brooks finished his junior season with 28 dunks — after shooting 64 percent at the rim.

However, unless he’s able to receive a waiver, Brooks will have to sit out the 2019-20 season with a redshirt, per NCAA rules.

Immediately after Joey and Sam Hauser announce their decisions to transfer out of Marquette, news leaked with Virginia — the recent national champion — as the frontrunner to land the pair. Well, about a month after that initial bit of news, the Hauser brothers will take a visit to Charlottesville later this week.

Marquette transfer Joey Hauser tells me he and his brother Sam will visit Virginia on Thursday and Friday and then Michigan State on the 14th and 15th. Already visited Wisconsin.

Two weeks back, Dabo Swinney agreed to a 10-year extension with Clemson — worth $93 million. To celebrate, Swinney has decided to take in some NBA Playoffs basketball (smart man), and even spend some time with Drake.

On Saturday night, Swinney saw the Rockets host the Warriors in Houston with his sons; then on Tuesday night, he was north of the border to watch Kawhi Leonard and the Raptors push the Philadelphia 76ers to the brink of playoff extinction. Before the game, though, Swinney even had his own chance to go get some buckets.

Also, this happened, too:

According to Jeff Goodman, NC State and Florida State Basketball have added some notable events to future schedules.

NC State will participate in the 2020 Empire Classic, which used to be known as the 2K Classic. That event will take place up in Madison Square Garden. The other three teams to receive invites to this event are strong, too: Baylor, Villanova and Michigan.

As, per Goodman: Florida State will play in the 2020 Charleston Classic.

G League Elite Camp: Which ACC player received invites, and why that could be significant