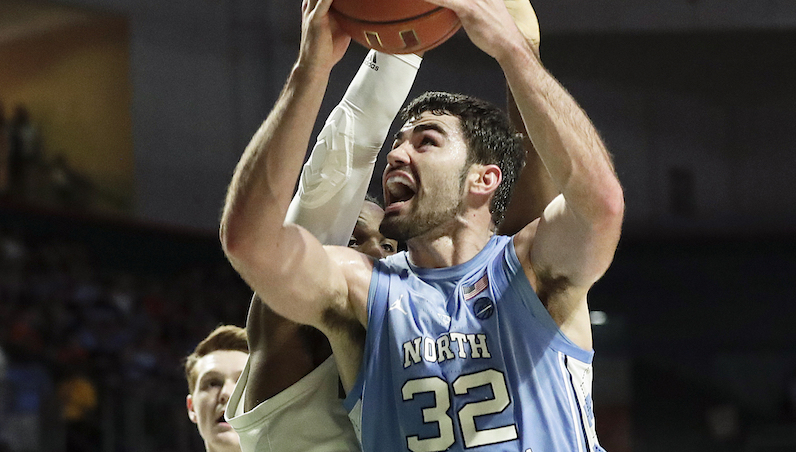 After a busy weekend of ACC basketball, let’s hit the reset button. Here’s a look at what’s going on around the ACC on this Monday morning.

On Sunday evening, 5-star center Isaiah Stewart — a top-10 prospect in the 2019 class — committed to Mike Hopkins and Washington. Stewart was a target of both Duke and Syracuse; he selected Washington over those two ACC programs, along with Michigan State and Kentucky.

Isaiah Stewart on Washington: "I feel like they deserve a top recruit. It's been awhile. I'm going after Jaden McDaniels now. We trying to build something out there. … if we get him, man, game-changer."

This could be a really fun matchup; both teams rank inside the top 10 of KenPom’s efficiency ratings and feature two of the better offenses in college hoops.

Keep an eye on how Virginia Tech targets Luke Maye. The Hokies do a marvelous job spreading the floor. Can Tech take advantage of Maye guarding in space, away from the hoop?

The percentage of opponents' FGAs that I've charted as "well-contested" by UNC has dropped for each conference game so far:

Not a great defensive trend after an excellent start to the ACC season.

The last time these two teams met was last January. Virginia Tech won that game at home, 80-69, behind 19 points and four assists from Justin Robinson.

Trailing FSU by 11 points at halftime, it looked as through Boston College was headed for its sixth straight loss and an 0-5 start to ACC play; Ky Bowman, however, had other ideas. The star junior guard trigged a massive 51-point second half. He finished with a game-high 37 points (6-of-8 3PA).

Ky Bowman had himself a GAME, scoring 37 points on 13-of-18 shooting including 6-of-8 from beyond the arc 🔥 pic.twitter.com/7Ol6pBOqnq

Florida State was led by Mfiondu Kabengele’s 26 points off the bench.

Trooper Taylor will reunite with David Cutcliffe in Durham next season. The well-traveled Taylor spent the last five seasons on staff at Arkansas State. He worked with Cutcliffe at Tennessee during the 2006 and 2007 seasons.

Welcome to the family @AstAteTrooper

NC State has added Todd Goebbel to its staff as its tight ends coach and special teams coordinator. The move was finalized on Sunday. Goebbel spent the last four seasons at Marshall.

Notes from The Benchwarmer: Kyle Guy keeps it moving; plus a look at the defense of Tre Jones