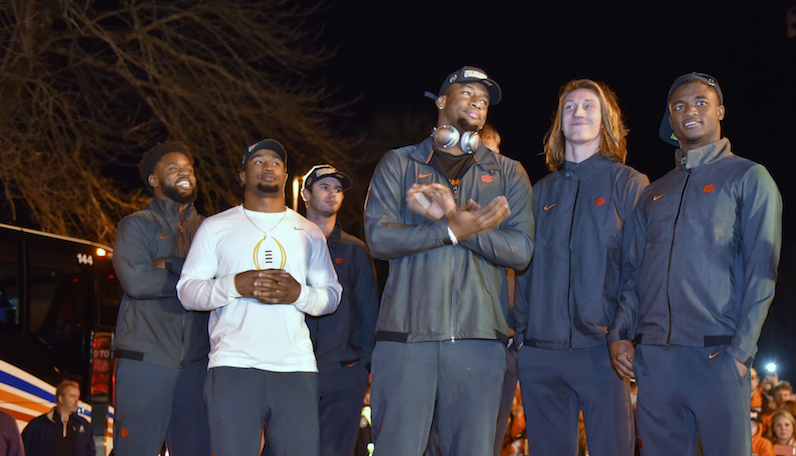 It’s Friday. We made it. Here’s what you need to know headed into the weekend on the ACC. Speaking of, enjoy a full menu of Saturday games — with seven ACC match-ups set to tip between 12 p.m. and 6 p.m.

Matthew 17:20… My Foundation Is Built On Faith And Through That Greatness Is Achieved..🙏🏾 pic.twitter.com/YUAKS1OS8K

On the way to another national title, Ferrell led the ACC with 11.5 sacks (9.5 in 2017) and 19.5 tackles for loss. For those efforts he was named the 2018 ACC Defensive Player of the Year. He ends his career at Clemson — where he helped form one of the top defensive lines in ACC history — with two national championships and plenty of individual hardware.

No. 1 Notre Dame defeats No. 2 Louisville

In women’s college basketball, the top two teams met up on Thursday night; and No. 1 Notre Dame, at home, got the better of No. 2 Louisville, 82-68.

Notre Dame was again led by Arike Ogunbowale, who scored 30 points (8-15 FGA) and stuffed the rest of the stat sheet: six assists, five rebounds, two steals and a block.

After that result, and a win over Pitt on Thursday night, the NC State women’s basketball team is the final remaining unbeaten squad in the ACC.

Pitt could have Sidy N’Dir back this weekend vs. NC State

However, N’Dir plans to go through a full practice today, and could suit up on Saturday against No. 15 NC State.

Pitt coach Jeff Capel just said on his radio show that injured guard Sidy N’Dir is “close” to returning and will practice in full tomorrow. If there’s no pain, he’ll be available for Saturday at N.C. State.

Duke is set to host Syracuse in a marquee ACC matchup next Monday; however, six weeks later, the two will rematch up in the Carrier Dome. Well, according to Syracuse, that game, which takes place on Feb. 23, has nearly sold out — less than 1,000 tickets remain available.

With Manny Diaz at the helm, Miami football has landed another transfer. Wide receiver K.J. Osborn will transfer from Buffalo to Miami; he’s a graduate and eligible to play in 2019.

In the 2018 season, Osborn caught 53 passes for 892 yards and seven touchdowns. The year prior, he snagged 35 receptions for 493 yards and four touchdowns.

For his final coaching staff hire, Geoff Collins — the man tasked with replacing a legend — plucked Brent Key from Alabama.

Key, who played tight end at Georgia Tech (1997-2000), was the offensive line coach at ‘Bama. He will hold the same position at Tech.

Last Night in ACC Hoops: De’Andre Hunter gets back to his usual stuff for UVA