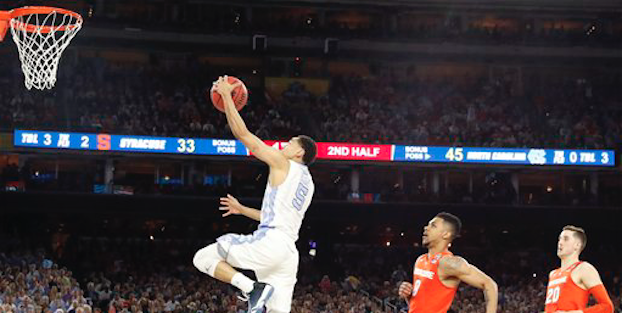 Marcus Paige (5) and North Carolina will square off with Villanova on Monday night. (AP Photo)

North Carolina and Villanova will tip off in Houston at 9:19 p.m. ET Monday in the NCAA championship game. If you’re planning on going, and if you’re hoping to sit anywhere near the court, you’ll have to pay up.

The game will be played in NRG Stadium, which seats over 76,000 fans for basketball matchups. As of Monday morning, the cheapest ticket on StubHub — located on the second-highest level in the corner — was going for $70.

The most expensive tickets listed are running for $2,950. Those are for spots in the sideline risers.

Parking passes on StubHub don’t start for quite as much. The cheapest listed is for $29.00, but there are only 28 passes available for less than $80.