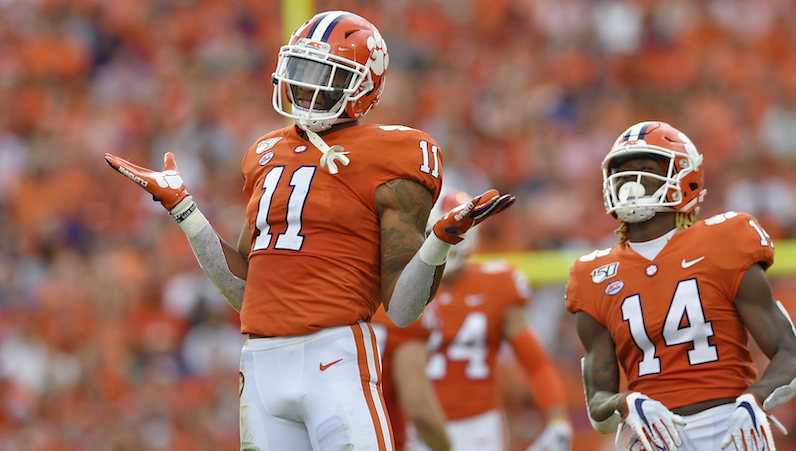 Clemson's Isaiah Simmons (11) and Denzel Johnson react after making a defensive play during the first half of an NCAA college football game against Florida State Saturday, Oct. 12, 2019, in Clemson, S.C. (AP Photo/Richard Shiro)

The 2020 NFL Draft, in its altered remote form, is set to start this week: April 23-25. Round 1 of the draft will start in primetime (8 p.m.) on Thursday, with coverage on multiple networks — ESPN, ABC and the NFL Network.

The SEC, led by (who else) Alabama and LSU, is set to dominate the first night in terms of draft picks. However, a couple ACC guys project as possible first round talents, too. Here’s a look at the names, starting with Clemson’s Isaiah Simmons.

(Note: Notre Dame players aren’t included in this brief list, although WR Chase Claypool, after a monster combine performance, and edge rusher Julian Okwara are potential first round pieces, too.)

After three dazzling seasons with Clemson, Simmons will take his position-less/do-everything gifts to the NFL. Simmons was the most talented player in the ACC this year, as he pushed the nation’s No. 1 defense.

Even after losing a ridiculous amount of talent to the 2019 NFL Draft, Clemson continued to dominate defensively, thanks to the versatility of Simmons. He plays like a small-ball power forward in basketball, capable of switching 1-5 and creating events all over the floor.

His straight-line speed is comically absurd.

Simmons finished the 2019 season with 102 tackles (6.8 per game) and 16 tackles for loss, both of which ranked top 10 in the ACC. Over the last 20 seasons, Simmons is one of only 23 FBS players to record 15 tackles for loss and three interceptions in the same season.

There’s no question: Simmons projects as a top-10 draft pick.

It didn’t take long for Becton — a 3-star recruit from Richmond — to make a name for himself. As a true freshman, Becton made 11 starts and graded out as Pro Football Focus’ top rookie.

Over the next two seasons, Becton started every game, including a resurgent 2019 campaign for the Louisville program under Scott Satterfield.

PFF grades Becton as one of the top five offensive tackles in the class, though the scouting service is lower on him than most draftniks. There’s some concern that he wasn’t elite in a smaller sample of pass protection plays this season. Regardless, he’s huge and his adjusted SPARQ score is very impressive.

Becton has the potential to slide into the top 10 of the 2020 draft. Also: the 6-foot-7 Becton likes to cook, which is awesome.

anonymous scout is concerned about mekhi becton because he … likes to cook? pic.twitter.com/sHwww8Pg2k

Terrell is the latest and greatest of recent Clemson cornerbacks; there’s an excellent chance for him to land in the back half of the first round, too. Ohio State’s Jeff Okudah is in his own tier among this year’s corner class; however, Terrell has very real appeal, thanks to his frame and speed.

With 44 games under his belt at Clemson (1,827 snaps), Terrell recorded 107 career tackles (3.5 for loss), 20 pass break-ups, six interceptions and two forced fumbles. As a sophomore and junior, Terrell started all 30 games as the Tigers (29-1 record) went to back-to-back CFP National Championship games.

Terrell is one of 15 ACC players, over the last three seasons (2017-19), to record 100+ tackles and at least five interceptions. That group is mostly comprised of safeties, though there are some corners, too: Terrell, Essang Bassey, Amari Henderson and Stanford Samuels III.

Even in Clemson’s insanely deep wide receiver room, Higgins stood out early in his career. He continued to get better and better. During his three-year run in Death Valley, Higgins played in 43 games (30 starts, 1,279 snaps), amassing 135 receptions for 2,448 yards and 27 receiving touchdowns — tied for the most in program history with DeAndre Hopkins and Sammy Watkins.

(Rising junior Justyn Ross sits at 17 career touchdown catches. With a full season ahead and Trevor Lawrence at quarterback, Ross should have that record in his sights.)

Higgins may have underwhelmed athletically at his pro day, but he has a great frame and uncanny body control.

That combination of gifts led to some acrobatic receptions, and turned Higgins into a big-play machine. Higgins, who led the ACC in 2019 with 13 touchdown catches, finished his junior year with 21 receptions of 20+ yards (No. 9 in the FBS). He’s one of just seven ACC players, going back to 2000, to record 50+ receptions and 10+ touchdown catches, while averaging at least 18 yards per catch.

Along with CeeDee Lamb and Jerry Jeudy — two top-15 prospects for the 2020 draft — Higgins was one of only nine FBS players over the last three seasons to record 100+ receptions and 25 touchdown catches.

There is, however, a fair amount of variance with Higgins. Some draft models grade the lanky wideout as a (late) first round talent; others slot him early in the third round.