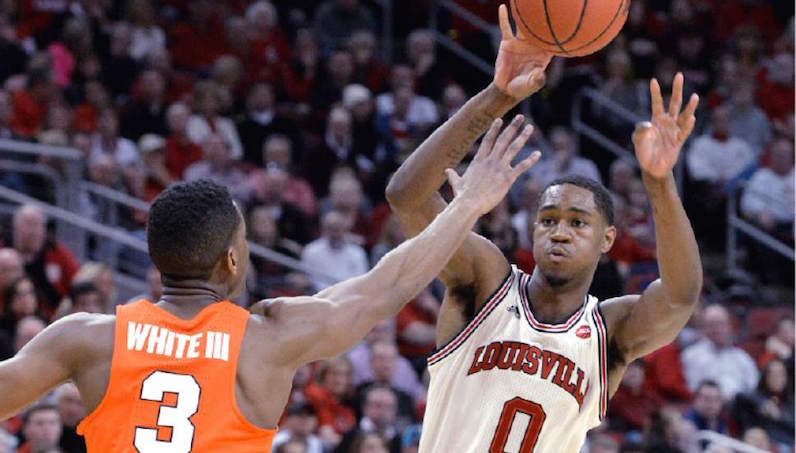 Louisville's V.J. King (0) passes over the defense of Syracuse's Andrew White III (3) during the second half of an NCAA college basketball game, Sunday, Feb. 26, 2017. (AP Photo)

Louisville basketball is already trying to turn the page to next season, and understandably so. There is a lot to be excited about, especially if All-ACC guard Donovan Mitchell returns for his junior season. A big part of that future movement — regardless of what happens with Mitchell — will be rising sophomore wing V.J. King.

King played just under 14 minutes per game as a freshman, but the former prep All-American showed flashes of a broadening perimeter game.

Three peas in a pod

As a team, Louisville shot 35.5 percent on three-pointers, which ranks right around the middle of the pack nationally. This perimeter punch was built largely around the evolving games of Mitchell and Deng Adel, who took a considerable step forward this season. King, however, was also accurate from distance, albeit in a much smaller sample.

According to Synergy Sports, King connected on 43.3 percent of his catch-and-shoot attempts this season. That is exactly the kind of skill that is perfect to install around Mitchell’s pick-and-roll attack. Teams have to account for Mitchell off a high ball screen and bump down to curtail the big man rolling to the basket. This action will open shooters, especially on the weak side, which is where the interior help must come from.

King, for the record, drilled 16 0f 38 three-pointers this season for a team-leading 42.1 percent from distance.

They say the best things in life are free

Free throws are a wonderful avenue to accrue points. King, who shot 82 percent on free throws this season, can get to the line, too. According to KenPom, King drew 4.1 fouls per 40 minutes — better than Mitchell and Quentin Snider. King was fourth among Louisville’s rotation players with a free-throw rate of 40.3 percent. That, combined with his three-point accuracy, helps make up the foundational elements of an efficient offensive player.

The dribble-drive was not a huge part of King’s game this season, but it was effective when he went to it. King shot 50 percent from the field on drives, according to Synergy, which is pretty good. In a very limited sample, King drew a shooting foul on 44.4 percent of these possessions. It is unwise to extrapolate too much from a couple possessions; there can be a lot of noise in numbers like this, and that 44.4 percent figure is unsustainable.

However, it could also forecast a nifty off-the-bounce game that Louisville desperately needs. It was obvious against Michigan; when Louisville was bogged down on offense, it was up to Mitchell’s solo act to create. That happened too much in 2016-17. King — along with Snider — could offer more balance in this capacity.

What’s in the Cards?

In the shock immediately following Louisville’s second round defeat to Michigan, Mitchell proclaimed that he could not wait to win a championship next season. Rick Pitino spoke with 93.9 The Ville in Louisville and stated that he advised Mitchell to go through the NBA Draft process — interview and work out with teams. Pitino preached caution, however, and recommended a return to school if Mitchell fell outside guaranteed first-round pick status.

If Mitchell does come back, the Cardinals should be mentioned as possible title contenders. Scheduled departures are relatively minimal, and Louisville has the beef along its frontline to offset the loss of Mangok Mathiang.

Deng Adel may immediately block King’s path to expanded playing time, but that can only last for so long. King will build upon a solid freshman season, and when that happens, Pitino will have to find ways to get him on the floor. Additionally, if Mitchell enters the draft, King could find himself starting next season with Snider and Adel.