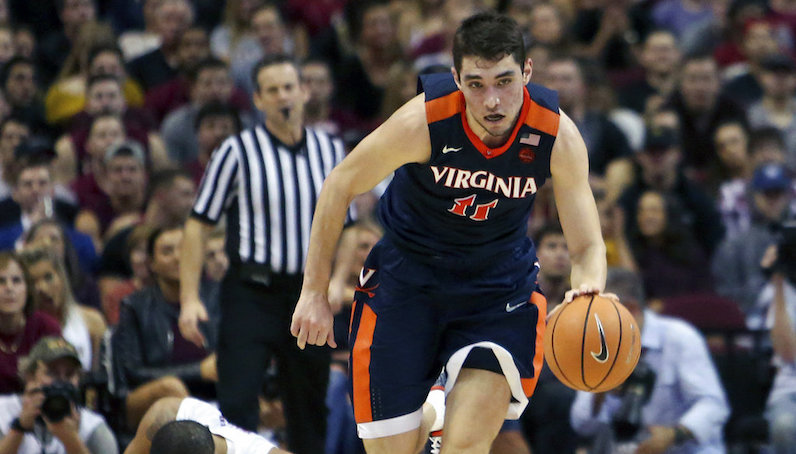 Virginia's Ty Jerome breaks away after a steal from Florida State in the second half of an NCAA college basketball game, Wednesday, Feb. 7, 2018, in Tallahassee, Fla. Virginia won 59-55. (AP Photo/Steve Cannon)

With eight days between games, Virginia looked a bit rusty early Wednesday night against what had been a struggling Georgia Tech team. But as sophomore point guard Ty Jerome took over in the second half, the Cavaliers got to see one benefit to an extended break late in the season.

Jerome played with his right wrist and thumb wrapped up against Virginia Tech and Miami and went a combined 5-for-19 from the field in those games. Wednesday, he was able to get back into a groove, particularly in the final 12 minutes of the game, and finished with 18 points, shooting 4-of-6 from three-point range.

That’s a heartening development for the Cavs as March quickly approaches. Jerome began the season in a shooting slump, but UVA’s rise to No. 1 in the country and ACC domination coincided with the New York native finding his stroke, particularly beyond the three-point line.

According to Synergy Sports, Jerome now ranks No. 1 in the ACC in efficiency on isolation possessions: 1.23 points per possession — on 46.7 percent shooting.

Jerome didn’t make a big deal out of the injury, and simply credited his teammates for helping him get open looks, but he was clearly more comfortable against the Yellow Jackets.

“I think it was just right spot, right time, some open looks,” Guy said. “There was one time Dre was pushing in transition and he found me behind him. Just my teammates doing a good job of finding me in the right spots and I will be able to knock them down.”

The odds of turning this incredible regular season into a historic NCAA Tournament run are a lot better for the Cavs if Jerome remains a consistent scorer. Virginia knows it can’t count on a lot of offensive production out of the front court, but with De’Andre Hunter’s emergence during conference play, the Cavaliers have four players who can fairly consistently score in different ways.

But given that Jerome is the primary ball handler and perhaps the Virginia player coach Tony Bennett most wants taking a shot with the game on the line, the removal of the wrap on his shooting hand was a big deal.

Virginia has overall had good fortune on the injury front this season with nobody in the regular rotation missing a game because he was hurt. UVa has used the same starting lineup in all 27 games, and other than a three-game suspension for Nigel Johnson, essentially the same eight-man rotation since Christmas.

“We have not always had that luxury to do that,” Bennett said. “Up to this point we have been very fortunate. We have an elite medical staff with (head athletic trainer) Ethan (Saliba) and our doctors. And what (strength coach) Mike Curtis does, it is not always by chance. Some of the things you cannot control. But they do a great job with their prep and keeping those guys as healthy as they can.”

With the No. 1 seed in the ACC Tournament wrapped up, it’s possible Bennett could make adjustments to get his regulars more rest over the next few games, but the Cavs have to be extremely happy with where they sit health-wise, particularly now that Jerome appears to be back in mid-season form.

Could UVA’s Ron Sanchez be in line for a head coaching opportunity?