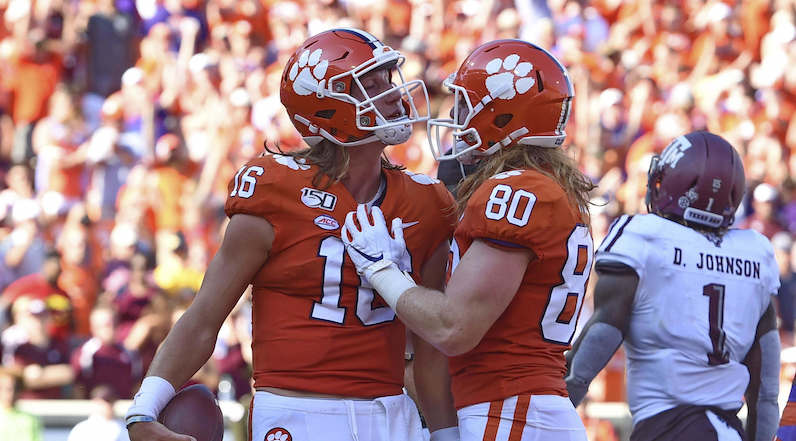 Two up, two done. Let’s get this week’s ACC Football Power Rankings started. Best of luck making sense of the middle of the league right now.

Clemson picked up a massive non-conference win over No. 12 Texas A&M on Saturday — with the defense in rare form. The Tigers held the Aggies to just 289 yards of total offense; Clemson forced two turnovers, too, including an interception from Tanner Muse. The lone touchdown A&M scored came with about six second left in the game.

On offense, Justyn Ross had his first big game of 2019: seven catches, 94 receiving yards and a touchdown — thanks to a wonderful running throw by Trevor Lawrence.

* A&M's D played well. Wasn't sure anyone would keep Clemson under 30. (FP helped)
* A&M's O was bad. Bad throws, dropped passes, like one drive of good running
* I'm not going to pretend to worry about Trevor Lawrence, but … ~7 yds/pass thru 2 games? pic.twitter.com/RWSOwuT9H8

Up Next: at Syracuse

Virginia was sloppy at times — four turnovers — but the Cavaliers ran all over William & Mary on Friday: 511 yards of total offense and 25 first downs in the 52-14 victory. Freshman running back Mike Hollins ran for 78 yards (7.1 per carry) and two touchdowns. Bryce Perkins, who threw two interceptions, also accounted for three touchdowns, too.

Up Next: Florida State

For the second straight game, Jamie Newman completed better than 70 percent of his passes, and threw for at least 300 yards and three touchdowns, too. On the season, Newman has thrown for 713 yards — 9.7 yards per attempt, 356.5 per game — six touchdowns and no interceptions.

So far, Newman already has 19 completions of 15+ yards as well. Wake Forest, on offense, plays super fast, and has found some nice run-pass balance in 2019.

Jamie Newman is 5th in the country with 713 passing yards. The four in front of him have all thrown interceptions.

Up Next: North Carolina (Friday)

Boston College wants to win games running the football, which is exactly what the Eagles did on Saturday against Richmond. Led by AJ Dillon, Boston College ran for 346 yards and three touchdowns — on 50 carries. That’s the seventh time under Steve Addazio that the Eagles have run for at least 340 yards in a game.

Dillon also hauled in a 42-yard touchdown reception from Anthony Brown, the second of his career at BC.

Up Next: Kansas (Friday)

After the upset win over South Carolina in Week 1, North Carolina started hot against Miami. The Tar Heels scored on their first two possessions, including this gorgeous play-action strike from Sam Howell to Dyami Brown — a 62-yard bomb.

Miami fought back, though, and made this a wildly competitive game in Chapel Hill. Howell, in his second career game, was pretty darn good. The rookie quarterback threw for 274 yards, two touchdowns and zero interceptions.

His most important completion of the night came on 4th-and-17, UNC trailing by five with zero timeouts and under three minutes to play.

This completion helps pave the way for what should be a fun matchup of two 2-0 ACC teams this Friday — UNC at Wake Forest.

Two 2-0 teams in Winston-Salem on Friday night. Sept. 13. Old rivals renew a rivalry outside the constraints of an ACC schedule. Fun stuff.

Up Next: at Wake Forest (Friday)

So, um, what happened here? On Saturday, Syracuse went on the road, gave up 21 first-quarter points to Maryland, allowed 650 yards of total offense and got absolutely boat-raced by the Terps, 63-20.

Maryland went 11-of-15 (73.3 percent) on third down in this game as former Virginia Tech quarterback Josh Jackson threw for 296 yards and three touchdowns. However, most of the damage came on the ground; Maryland ran for six touchdowns while also averaging 7.9 yards per carry.

On the season now, Syracuse has allowed five carries of 20+ yards, which is the worst in the ACC. With Travis Etienne and Lyn-J Dixon coming to town this week, that had better change — quickly.

Going up against an overmatched Western Carolina team, NC State pitched a shutout and, once again, kept its opponent out of the end zone. In wins over East Carolina and Western Carolina, the Wolfpack have allowed just 49 total rushing yards. For the second straight game, NC State recorded three sacks — including the first of the season for defensive tackle Alim McNeil.

On the flip side, NC State has controlled the time of possession, too. True freshman back Bam Knight was superb: 119 yards on the ground and two touchdowns.

While West Virginia hasn’t looked great so far this season, the competition level will pick up for NC State next Saturday.

Up Next: at West Virginia

Miami was sloppy in the Week Zero loss to Florida. However, the Hurricanes cut down on the penalties and turnovers at North Carolina, but still came up just short. Jarren Williams had a solid game throwing the ball: 30-of-39 (77 percent) for 309 yards and two touchdowns.

Despite the improvements, Miami still made critical mistakes, including a costly targeting call on Amari Carter. At 0-2, Miami is already at a critical juncture in its season. There’s still a lot of talent on this roster, and the defense should play better, too, but it’s time for Manny Diaz to get this back on the rails.

After Old Dominion made it a one-possession game in the fourth quarter, Virginia Tech responded with a touchdown pass from Ryan Willis to Phil Patterson. The Hokies avenged last season’s loss at ODU with a 31-17 victory; however, even this was still a little too close for comfort.

Coaches should all give Wheatley a cut of their paychecks. Without that momentum who knows what happens this game and to their job security. https://t.co/kQPt0t7lBs

Right now, it’s hard to say if things are pointed in the right direction down in Tallahassee. From the looks of it, that doesn’t appear to be the case

All of that said, Cam Akers was awesome for FSU — carrying the ball 36 times (a program record) for 193 yards and two touchdowns.

Up Next: at Virginia

Pittsburgh rebounded from its opening to loss to Virginia with a 20-10 win over Ohio. It’s a far-from-flashy result, but quarterback Kenny Pickett did throw for a career-high 321 yards. His top target was Maurice Ffrench, who caught 10 balls for 138 yards — both career highs, too.

The competition really picks up the next two weeks as Pittsburgh travels to rival Penn State, then hosts Central Florida.

Up Next: at Penn State

In the 2019 opener against Alabama, Quentin Harris sat on the Struggle Bus. No real surprise there, though. And last Saturday, the veteran quarterback responded well: 345 passing yards, four touchdowns and no interceptions in a home win over NC A&T. Harris became the fifth different quarterback at Duke to throw for at least 340 yards in a game under David Cutcliffe.

Up Next: at Middle Tennessee State

Less than a week after a tough game against Notre Dame, Louisville held Eastern Kentucky to zero points and less than 200 yards of total offense. Reviews may still be mixed, but Jawon Pass connected on four touchdown passes, including two to his tight end Marshon Ford.

At this point, though, give Scott Satterfield credit; this program, and its quarterback, are in a much better place in 2019.

Geoff Collins got his first victory as Georgia Tech’s head coach with a 14-10 win over South Florida on Saturday. The Yellow Jackets still looked shaky throwing the ball, but Tech’s defense and special teams came to play.

TK Chimedza: "Everybody looks to offense, defense, but special teams really won us the game today."